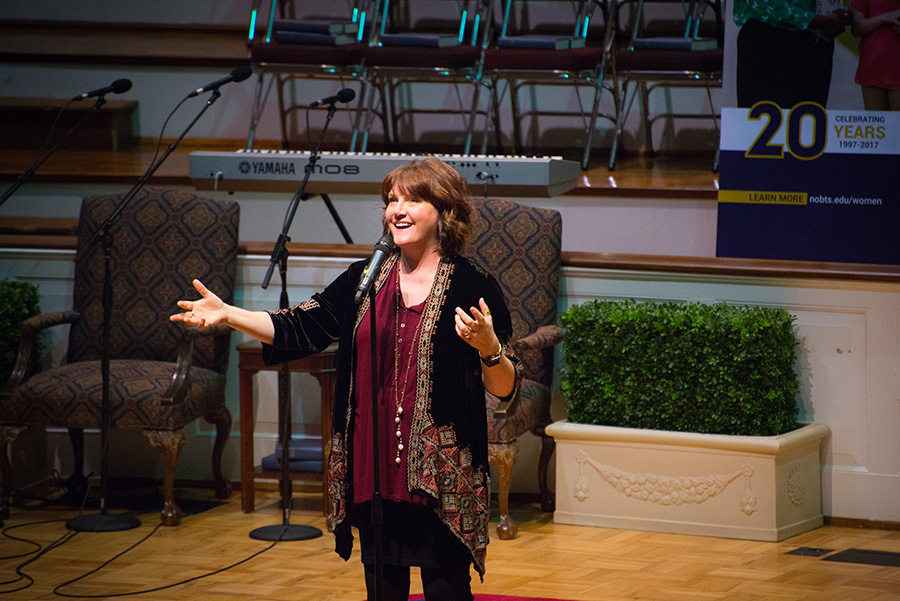 NEW ORLEANS (BP) -- At home or on the job, women committed to discipleship and transformed by Christ can change the world, speakers said at New Orleans Baptist Theological Seminary's "Discipling women into the future" conference.

Rhonda Kelley, wife of NOBTS President Chuck Kelley, said the March 15-16 sessions aimed to equip women to minister through the church to other women, which the seminary's women's academic programs likewise do.

"Women are gifted by God to serve Him and others but must develop those gifts and abilities personally," Kelley said. "As women grow in their faith, they can pour truth and experience into the lives of others through discipleship and mentoring. What a joy to train others for woman-to-woman ministry."

Comedian Anita Renfroe opened the conference with a performance of song and laughter. Renfroe, whose stage and television appearances include the Grand Ole Opry, "Good Morning America" and CBS' "The Early Show," has produced numerous DVDs and books including "The Purse-Driven Life" and "Don't Say I Didn't Warn You: Kids, Carbs and the Coming Hormonal Apocalypse."

Renfro, in her concluding devotional thoughts, called on women to give God whatever is in their "hearts, hands and home."

Author and speaker Chris Adams, who retired last year as the lead women's ministry specialist for LifeWay Christian Resources, drew from author Robby Gallaty in urging conference attendees to be disciples who make disciples. Gallaty is pastor of Long Hollow Baptist Church in Hendersonville, Tenn., who with his wife Kandi leads the discipleship-based Replicate Ministries.

Adams said the purpose of an effective discipleship program is "replication." "If we don't invest in the spiritual health of women, we will fail in being good leaders for them," Adams said. "The goal is to disciple women so they can teach someone else."

Discipleship is more than coming to Bible study, Adams said, noting that it should lead to spiritually mature women who are called by God, growing and becoming like Christ, submitting to His authority and willing to sacrifice in order to follow God's leading.

A clear course for discipleship, Adams said, is founded on prayer and focused on transformation of lives rather than on attendance numbers. Helping women catch a vision for how God can use them is a must, she said.

In testimony, NOBTS student Amy Smith shared the struggles of losing her father as a young teen. Her life changed when a mother who had lost a son to suicide connected with her, Smith said.

"She discipled me," Smith said. "I watched her use her pain to pour her life into mine."