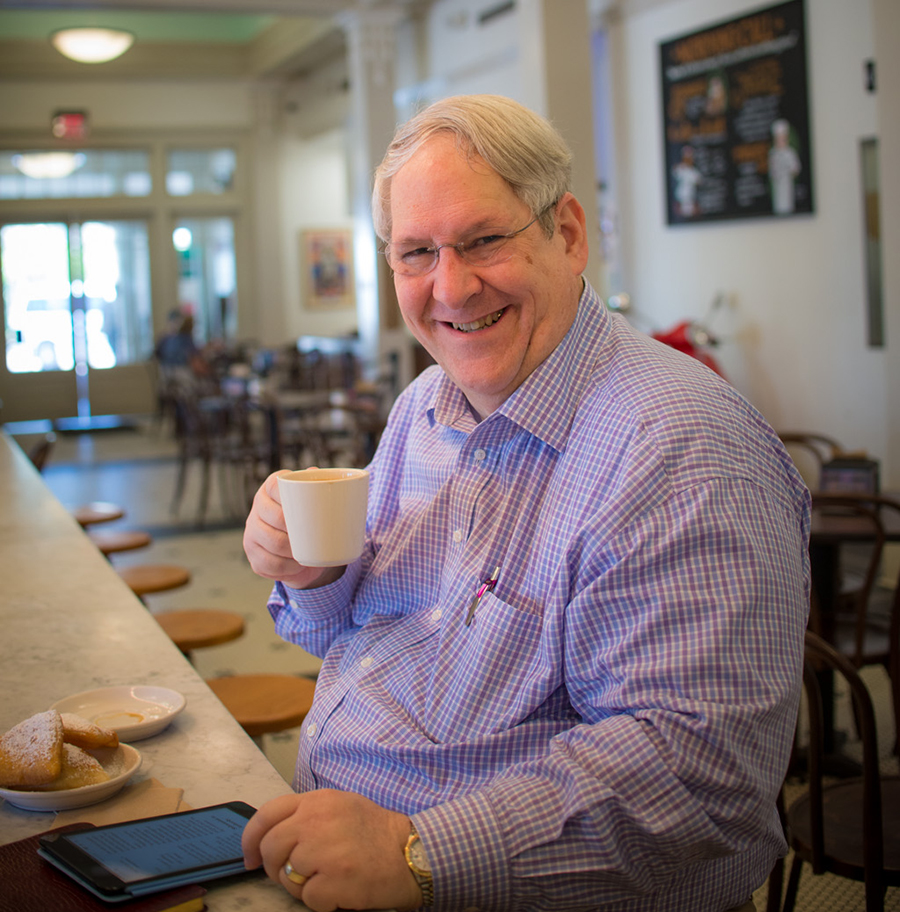 Coffee with Kelley: NOBTS -- Then and Now
By Chuck Kelley, Chris Shaffer, and Steve Morgan

My friend Chris and I were talking recently about life in NOLA, and we wanted to know about Dr. Kelley’s experiences here in the city, no matter the topic.* So, we asked him if we could sit and ask him some of our questions. He obliged and here we are. What follows are just pieces of our coffees with Kelley.

Chris: Tell us about the history of the Seminary and what you think will happen moving into the future.

Dr. Kelley: We are on the front porch of the Seminary's 100th birthday. It's a very exciting time for Southern Baptists and New Orleans Baptist Theological Seminary (NOBTS). The Seminary was established as a mission project of the Convention. One of the rationales given for starting a seminary in New Orleans was to provide a model for the International Mission Board to use in creating seminaries in foreign countries. It was an astonishing decision for a largely small-town denomination to want to establish a seminary in the city of New Orleans. I do not know of another denomination that has put a seminary in the United States where they do not have many churches.

Typically, a denomination’s entities are located near their churches. That has certainly been the SBC practice. Look across the board at all the SBC entities, and every entity is in a Baptist place. Even Golden Gate, now Gateway Seminary, has more churches within 50 miles of either location than we do here in New Orleans. Southern Baptists decided to do something different with our seminary; they put a seminary in a place where Baptists were not, so that it might be a base for church planting and evangelism plus a laboratory for training people to do ministry in a clearly non-Baptist context.

So, here we are! We now have the largest Baptist population that New Orleans has ever had. We had about five or six churches when the Seminary was founded. We now have more than 100 churches and mission points, not to mention all the other churches in South Louisiana, South Mississippi, and on the north shore of Lake Pontchartrain, and other surrounding areas. Yet still we have a lot of unreached people. No one yet describes this as a Baptist bastion. We started as a mission station, and we remain a mission station today with clear progress happening in between.

Because of the past work of NOBTS, our students were planting and serving the small churches in the area. That is the nature of a missional setting. Here we are today, 100 years later with the Caskey Center Program designed to equip leaders of small churches, and to prepare them for excellence in ministry. So, again, you have the then and the now, and it's similar but it's also very distinct and very different.

Today, 1.5% of Southern Baptist Convention (SBC) churches have more than a thousand people present on any given Sunday morning; 70% have 100 people or less; and an about 90% have 250 or less. The churches the Caskey Center serves are the typical Baptist church. If these churches don't reach people, then Southern Baptists as a whole don’t reach people. Learning how to help them become fruitful is a crucial challenge for our future. We teach our Caskey students a Monday morning prayer, to ask Jesus to give them an opportunity to share the Gospel with at least one person during the week. As a group, they are having hundreds of witnessing opportunities, most of them unexpected.

Many pastors in these settings don't think they have a lot of prospects for evangelism. Yet, as they pray for witnessing opportunities, those conversations do emerge. They are able to share the Gospel, and many respond in faith. Our “No Restraints Conference” is designed to be an annual continuing education and encouragement experience for the leaders of small churches. People have come from nine different states to attend this conference. We offer scholarships in only three states, so the response of small-church leaders, understanding that this Seminary really is interested in them and committed to them, wanting to help them and encourage them, has been very interesting and very encouraging to see.

The Seminary started with a focus on small churches and it continues today. The difference: Today we have better tools. Consider the multiple delivery systems offered now by NOBTS. I spoke to a senior adult conference a while back in Meridian, Mississippi, and a gentleman came up to me at the end of the event to introduce himself. He was one of our graduates, I believe, from the fifties. He and a buddy were both pastoring in the Meridian area way back then. They would catch a train every Monday and ride down to the Seminary. They would do their classes Monday through Friday sleeping in the dorm, and then they would catch the train back to Meridian on Friday to serve their churches. We began serving students in other communities long ago; your choices then were a long commute or a correspondence course.

Today about 71% of our New Orleans campus students drive 50 miles or more to come and take their classes on the campus. For other students, we've developed multiple delivery systems using online technology, mentoring, compressed interactive video, and extension centers. We are able to equip anybody God calls, not only in the five states we serve, but literally anywhere in the nation or in the world.

To be a seminary in a place like New Orleans, you must do seminary differently, and we have always done seminary differently. We look around us now, and everybody is doing some variation of our strategy. What was once a very non-traditional approach to theological education has become the mainstream. Everyone seeks to equip people in both traditional, and non-traditional ways. It seems New Orleans is more than an interesting, eccentric city filled with people who need Jesus. It is also a time machine showing the challenges Southern Baptists will face in the future.