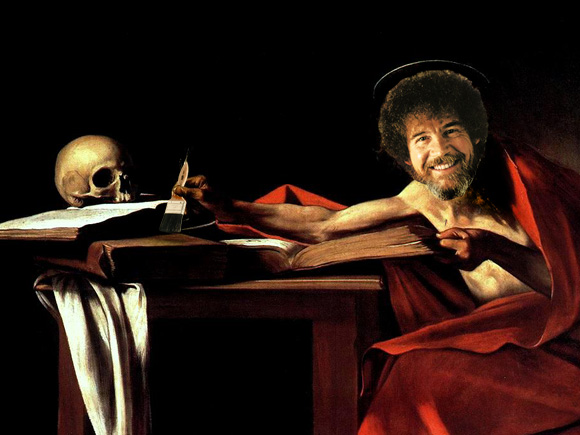 Bob Ross was many things. He was a father, husband, and television host. His painting show, “The Joy of Painting,” which aired in the late 80s and early 90s, developed a cult following. He also served in the U.S. Air Force reaching the rank of Master Sergeant. Moreover, he was –perhaps unwittingly – an accidental theologian. While he gave us gems such as, “There are no mistakes; only happy accidents,” and an innumerable amount of comments pairing adjectives with trees (fans of the show can surely recall a few of these immediately), he also said, “You need the dark in order to show the light.” This is a profound statement with significant biblical application.

Jesus, in John 8:12, says, “I am the light of the world. Whoever follows me will not walk in darkness, but will have the light of life.” The apostle John was particularly fond of the word light, especially in reference to Jesus. He utilized the term some 30 times in his gospel. Jesus’s claim that he is the light in darkness is one that may be counter-cultural for many people in contemporary society. After all, many people seem to picture Jesus as a 1stcentury Ross in the sense that he went around and gave 140-character limit sermons, never said anything negative, and whose general mission was to give butterflies in the stomachs of 21st century Americans looking to live their best lives now. What is this darkness Jesus speaks of? We won’t know the significance of the light unless we know the reality of the darkness.

The reality is that darkness does exist in this world. We need not go far to see it; for our news reports remind us daily of this fact. The current election cycle is an absolute mess. ISIS, just recently, bombed an airport in Brussels, Belgium that left at least 130 people dead. Planned Parenthood murders the most defenseless of the population–the unborn–while also trafficking their body parts for profit. In a twisted display of the competency of our (un)justice system, David Daleiden was indicted to attempting to purchase body parts from Planned Parenthood, yet the organization was somehow not held responsible for making those parts for sale to begin with. How someone is able to purchase something that’s not for sale is beyond me.

Darkness is real. Evil is real. This should not be in question. And yet, none of the major world views, save Christianity, provide a response and an answer to this darkness that is both intellectually viable and existentially satisfactory. Most forms of Buddhism deny that evil exists. Christian Science – which is “Christian” and “Scientific” in the same sense that a grape nut is a grape or a nut – affirms this view as well. Contemporary atheism, in the manners of Richard Dawkins, Christopher Hitchens, Lawrence Krauss, and others, assert that there is neither good nor evil;[1] though, this doesn’t stop these men from passing unwavering moral judgments on religion. Islam does not appear to give any response to a theodicy either. But if there is no objective evil, then how can there possibly be a true good? We cannot, try as we may, derive meaning from a meaningless universe. Any apparent meaning is ultimately illusory. Despite what these worldviews assert, surely we realize that they are lacking in providing us a satisfactory answer here.

This is where Jesus steps in.

The Bible recognizes the existence of evil and doesn’t run away from it. Yes, the world is bad; yes, there is evil that occurs on a daily basis. The world is enveloped in obscurity and Jesus says, “I am the light.” In the midst of the darkness, Jesus is the incandescent one who brings light into the world. At the cross, he bore our sin and darkness so that we might have the light of the Father’s saving grace. Paul writes, “For our sake he [God] made him [Jesus] to be sin who knew no sin, so that in him we might become the righteousness of God” (2 Corinthians 5:21). Jesus became encased with darkness so that light would be shown, ultimately, through the resurrection and defeat of darkness itself. And unless we realize the depth of our darkness, we will never fully grasp the breadth of God’s grace. To adopt Ross’s statement, we need our darkness in full view so that the marvel of the gospel is shown. All of the other worldviews cannot give us an answer to the suffering and turmoil we experience. Paul’s words in 2 Corinthians 5 are earth-shattering. Jesus, the sinless Lamb of God, became sin. God poured out his wrath on Jesus who stood in our place. To talk of God’s wrath is increasingly becoming a cultural faux pas; however, a god with unconditional love and no wrath leads us to Oprah and “The Secret.” A god that is all wrath and void of unconditional love leads us to Islam. In Christianity, we see both God’s wrath and love on full display. God hates sin so much that He cannot let it go unpunished. Jesus loves us so much that he took that punishment in our place. Let us see the light of Jesus and share this message with everyone.
John Wesley wrote these words in, “The People that in Darkness Lay.”

1 The people that in darkness lay,

The confines of eternal night,

We, we have seen a gospel day,

The glorious beams of heavenly light,

His Spirit in our hearts hath shone,

And showed the Father in the Son.

Thou hast in us thy arm revealed,

Who, conscious of their pardon sealed,

3 In tears who sowed, in joy we reap,

And praise thy goodness all day long:

Him in our eye of faith we keep,

Who gave us our triumphal song,

And doth his spoils to all divide,

A lot among the sanctified.

4 Thou hast our bonds in sunder broke,

Took all our load of guilt away;

From sin, the world, and Satan’s yoke,

Redeemed us by our conquering Lord,

Our Gideon, and his Spirit’s sword.

With shouts, and garments rolled in blood,

Our Captain doth the fight maintain;

But, lo! the burning Spirit of God

Kindles in each a secret fire;

And all our sins as smoke expire.

[1]Dawkins writes, “The universe we observe has precisely the properties we should expect if there is, at bottom, no design, no purpose, no evil and no good, nothing but blind pitiless indifference.” Richard Dawkins, River Out of Eden (New York: BasicBooks, 1995), 133.

Alex Rea is a graduate of New Orleans Baptist Theological Seminary. He also works as the youth pastor at FBC Gonzalez in Gonzalez, Louisiana.