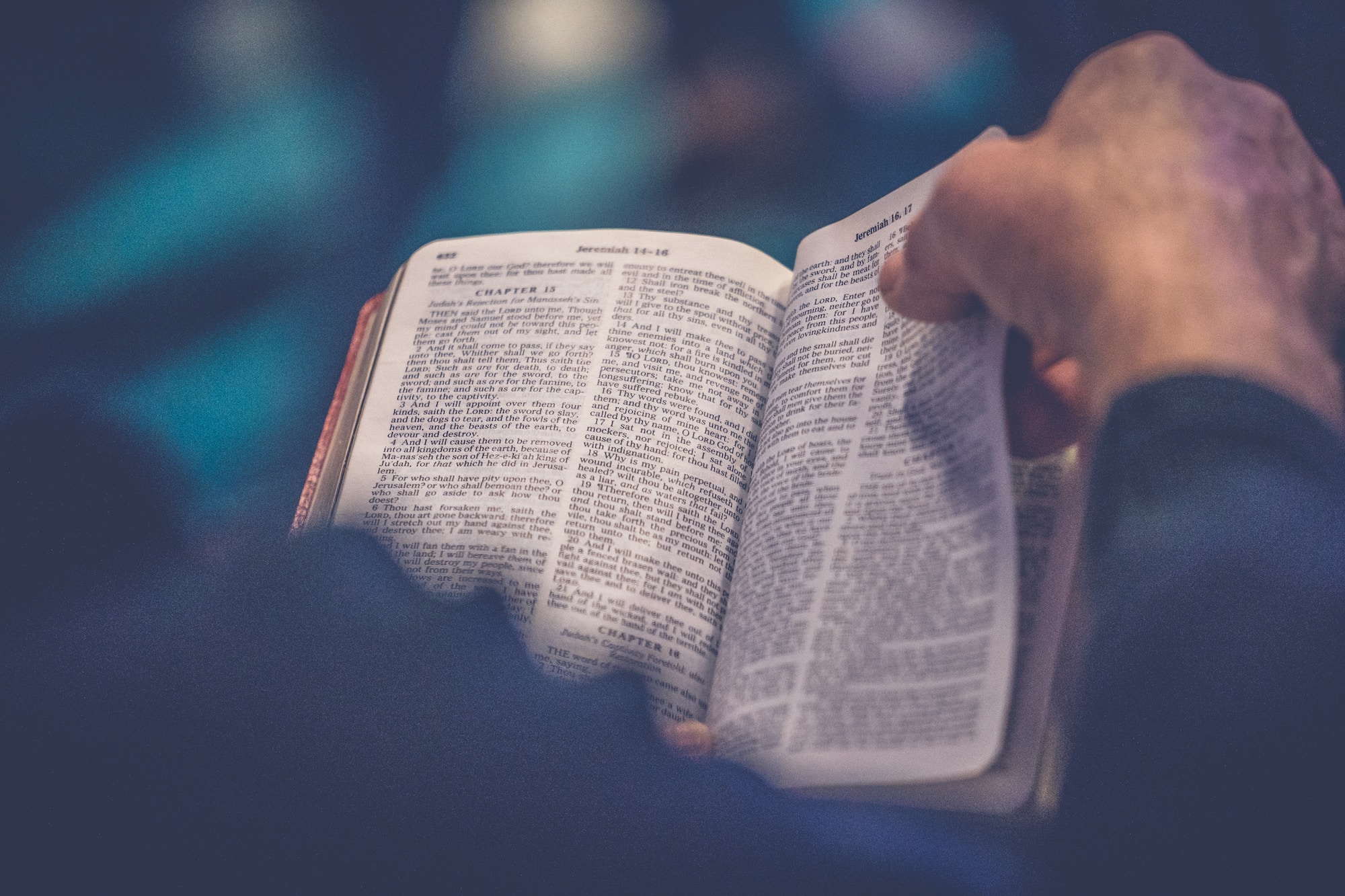 One of my greatest passions in ministry is preaching. If you know me, have had me for a class, or simply been in my presence for more than a minute, this is no surprise. But, among preaching, there is a certain kind that I am the most passionate about — systematic text-driven expository preaching. This revelation may be even less shocking. My wife affectionately calls me a “preacher nerd.”

Recently, through the Preaching Department of New Orleans Seminary we have been offering some electives on how to preach from or through different biblical genres. This has been thrilling. Last semester, I offered “Preaching from the Epistles.” Since the response to this course was positive, we chose to offer a similar course this semester — “Preaching from the Prophets.” At first blush, I felt completely ill-prepared to instruct others in understanding and proclaiming prophetic literature. Now obviously I have preached prophetic books, but to be transparent, teaching this biblical genre is not my greatest skill set.

In preparation for teaching others, therefore, I have become a learner. I have dug deep to learn as much as I can about the written prophets and how to best preach them. In my scouring, I found much that I did not know. And, thankfully, a few nuggets have arisen that make a great difference in approaching preaching the Prophets.

Therefore, in this article I would like to give you what I believe are the most important tips for preaching biblical prophecy. These are not intended to be an exhaustive step-by-step “text to sermon” process for preparing sermons on prophetic books. Rather, they are intended to be three truths to remember as you approach the process of preparing messages from this literature. They are in fact what I have come to view as my top three tips for preaching OT Prophecy.

The most common perspective by which to approach understanding the Prophets is to see them as primarily holding the task of “foretelling.” By this we are referring to making predictions. Specifically, when talking about the Prophets we think of predictions of “specific” future events that God promises to bring about in the world, especially as it relates to His people. Usually, these predictions center on the punishment and restoration of God’s people Israel or some eschatological hope. If we are honest, normally we think about the prophets as foretellers and then forth-tellers. They are predictors.

But, what if I told you that most if not all of their “foretelling” was not so much the prediction of completely new information or a new revelation from God as much as it was the application of a known Truth. Now this in no way is intended to diminish the supernatural nature of their roles and words. But, it may be helpful for us to have a slight perspective shift. Notice the pattern that is set in Deuteronomy 4 in the context immediately after God calls Israel to obey His Law.

“When you become the father of children and children’s children and have remained long in the land, and act corruptly, and make an idol in the form of anything, and do that which is evil in the sight of the Lord your God so as to provoke Him to anger, I call heaven and earth to witness against you today, that you will surely perish quickly from the land where you are going over the Jordan to possess it. You shall not live long on it, but will be utterly destroyed. The Lord will scatter you among the peoples, and you will be left few in number among he nations where the Lord drives you” (Deut 4:25-27).

So mainly, what the prophets did was apply, in a specific way, the message that God had given through Moses almost five to seven hundred years earlier. Therefore, perhaps the best way to see their message is not really as a message of judgment. Certainly, God knew how the people would respond and thus the ultimate outcome. However, the message was a message of repentance, and then one of hope based on obedience or judgement based on disobedience. This basic pattern is seen in the proclamation ministries of John the Baptist and then Jesus. It can inform our preaching of prophetic literature as well.

Second, Remember that Most of What They Promised Has Come to Pass

Returning to our discussion about the typical way of thinking about the prophets as foretellers, we would then do well to recognize the temptation that usually follows. We are conditioned to see most of their predictions as having a direct reference in our context. So, it may surprise you to know that over 90 percent of what is predictive material in the written prophets has been fulfilled already. “Consider in this connection the following statistics: Less than 2 percent of Old Testament prophecy is messianic. Less than 5 percent specifically describes the new-covenant age. Less than 1 percent concerns events yet to come in our time.”[1] We are not still waiting on these events to occur.

This should have tremendous baring on how we preach and make application in our preaching from the prophets specifically. By this, I do not mean that it removes or reduces its relevance for our audience. But, it does change and, I believe, enhances this portion of the Bible’s on-going significance. So, the question is if we do not approach prophecy as God’s predictions, or even direct warnings for our time, then how do we preach it to our people? Think 2 Peter 1, especially verse 19. “So we have the prophetic word made more sure, to which you do well to pay attention as to a lamp shining in a dark place, until the day dawns and the morning star arises in your hearts” (2 Pet. 1:19).

I am not saying that Peter here has in mind only the written prophecy of the Old Testament nor that his point has specific application for preaching the prophets. The template he gives and its implication, however, are helpful. We are among those today that have the sure prophetic word. We have a history of promises, both punitive and restorative, fulfilled by God. More importantly, we have a God who is not a novice. We see and have evidence of His trustworthiness in history reported through the Bible. And, His ultimate promise to us is His Son, Jesus Christ, the Morning Star who will rise.

The ultimate message of the prophets to us today is God is faithful! We can trust Him! He always does what He says. We can trust the Bible, “the prophetic Word made more sure.” Ultimately then our faith grows and it grows in Christ. “Most prophetic literature is not predictive. It is forth-telling, not foretelling. However, when prophecy predicts, what do we do? We should first remember that the prophecies served to build faith so that Israel would trust God. Therefore, when preaching, show how the prophecy came true. Seeing God’s hand at work built Israel’s faith, and it will build ours as well.”[2]

Finally, Remember Ultimately It All is Fulfilled in Christ

Here I do not mean that every single prophecy is messianic or that Christ is mentioned on every page of the prophetic books. What then are we talking about? The final promise of God through the prophets, redemption and restoration, and thus its ultimate fulfillment are accomplished in Christ.

There are many examples, but one will have to suffice for our purposes here. Look with me at Isaiah 51 for a moment. “Rouse yourself! Rouse yourself! Arise, O Jerusalem, You who have drunk from the Lord’s hand the cup of His anger; The chalice of reeling you have drained to the dregs” (Isa 51:17). The “cup of His anger” and the “chalice of reeling” is clearly a metaphor describing God’s punishment which He brought on His people because of their disobedience and unfaithfulness. It is a concept that is not foreign to us. We have seen it other places in God’s Word.

Interestingly enough, in at least one other location it is used as a picture of the punishment that God is going to mete out against all nations, Israel and those who have afflicted Israel. “For thus the Lord, the God of Israel, says to me, ‘Take this cup of the wine of wrath from my hand and cause all the nations to whom I send you to drink’” (Jer 25:15). Now look again at Isaiah 51. This time specifically note verse 22: “Thus says your Lord, the Lord, even your God Who contends for His people, ‘Behold, I have taken out of your hand the cup of reeling, The chalice of My anger; You will never drink it again.’”

God is going to remove this cup of wrath, His punishment, from His people forever. This is an act of mercy and grace. This is not based on merit. It is not as if God’s people are going to stop sinning, rebelling, and being unfaithful. They did not! They never became covenant keepers. They continued to break God’s Law even after the exile. So the question is why is God going to take this cup out of their hands. How is He going to take it out of their hands? Perhaps even more to the point, who is going to drink it for them?

It is, I believe, no coincidence that this oracle occurs one chapter before perhaps the most explicit prophecy in the Old Testament regarding Jesus’s substitutionary atonement, a section of text we call “The Suffering Servant.” More about this in a moment. How did Jesus understand or apply this prophecy about the cup of God’s wrath? One place we get the answer is in Matthew’s account of Jesus’s prayer in the Garden of Gethsemane. “And He went a little beyond them, and fell on His face and prayed, saying, ‘My Father, if it is possible, let this cup pass from Me; yet not as I will, but as You will’” (Matt 26:39).

Jesus is not simply using a common colloquialism or pulling a metaphor out of thin air. He is referring to the “cup of God’s wrath” and the “chalice of His reeling” as identified in Isaiah 51 and Jeremiah 25. He, at least indirectly, is alluding to the punishment that God had laid upon His people. And, more specifically, He is connecting His upcoming work and substitutionary sacrifice on the cross to the means by which this wrath will be appeased. Jesus is getting ready to take this cup out of their hands, our hands, and drink it to the dregs so they will never have to drink it again.

He is the Suffering Servant. “But He was pierced through for our transgressions, He was crushed for our iniquities; The chastening for our well-being fell upon Him, and by His scourging we are healed” (Isa 53:5). He is the ultimate fulfillment of what God said and promised through Isaiah and Jeremiah. When we preach prophecy, let us understand and remember that this is about Him.

I pray this article has helped you to do just this, recognize and proclaim Him from the Prophets. I pray that like me, it has turned you into a little more of a “preaching nerd.” And, I pray it has grown your passion and enhanced your ministry as you strive to accurately and faithfully Preach the Word!

Dr. Adam Hughes is the dean of chapel and director of the Adrian Rogers Center for Expository Preaching at NOBTS