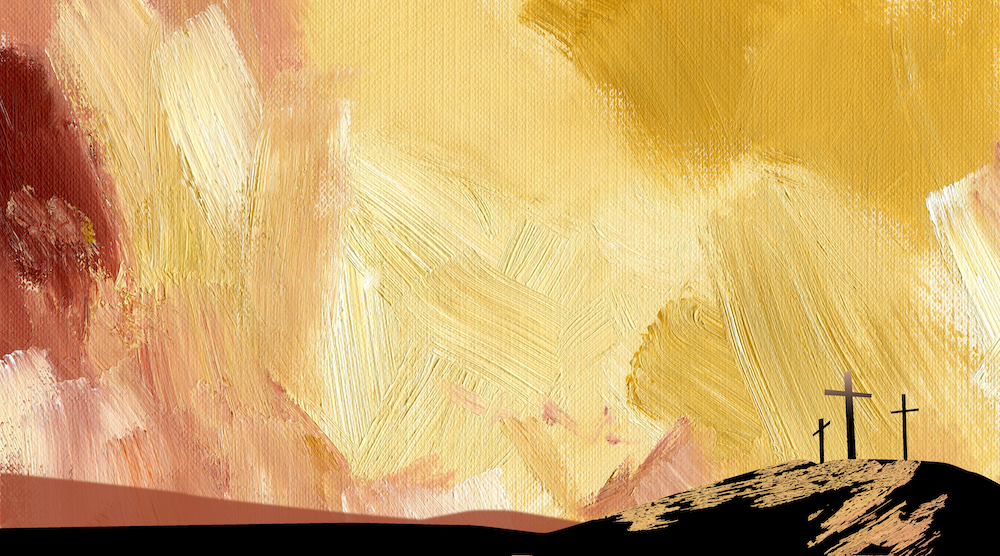 How would you respond to deep betrayal by a friend? One of my favorite movies as a kid was The Count of Monte Cristo. In the film, Edmond Dantes (Jim Caviezel) spends nearly two decades plotting revenge against his friend who framed him for a crime and stole his fiancée. Dantes escapes from prison and eventually defeats his foe through an elaborate plan.

Revenge movies are entertaining because the experience of betrayal is easy to empathize with. Trust is like glass. It takes enormous energy and care to build but is easily broken. Also like glass, when trust is broken, it makes a mess.

One of the best insights into Jesus' heart is to see how he responded to deep betrayal by his friends. He doesn't react as I would respond. In fact, his exchange for betrayal and defection is nothing short of amazing.

The Gospels teach theology by telling stories. The Gospel of Mark is an excellent example. His narrative is action oriented. The story is told at a quick pace. Extravagant details and commentary are not a part of this Gospel. Mark is focused, and he shows us who Jesus is by what Jesus did.

Near the end of the story, Mark narrates Jesus' last supper with his disciples. At the dinner, he made an announcement that shocked the room: ""Truly I tell you, one of you will betray me — one who is eating with me" (Mk. 14:18, CSB). The disciples immediately begin denying that they could ever betray Jesus. None of them could imagine such treachery against their leader and teacher. He confirms for them that his betrayer would be "one of the Twelve."

As if they weren't disturbed enough, after dinner Jesus further predicted that on top of one of them being a betrayer the rest of them would be defectors. They couldn't believe what they were hearing. Peter, being a no-nonsense kind of guy, pulls Jesus aside to correct him abrasively. His confidence is met with another disappointing statement. He will deny Jesus worse than any other disciple (Mk. 14:29-30).

Jesus is proven right when Peter emphatically denies knowing him three times during Jesus' trial. After the third denial, when he laced his defection with cursing Jesus, a rooster crowed a second time reminding him that Jesus predicted this very thing happening (Mk. 14:71-72). Peter's story in Mark tragically ends with "And he broke down and wept."

Betrayal cuts both ways. It breaks the heart of the one betrayed and tears apart the soul of the betrayer. Peter is torn apart.

Sin leaves us so broken because it is more than the violation of law but the violation of love. We were created for a relationship with God, and we feel the effects of that loss of connection when we sin. All sin is essentially betrayal. It is a denial of God for other things. Sin is choosing the creation over the Creator (Rom. 1:25). It is the refusal to love God, which is the greatest commandment (Dt. 6:5; Mk. 12:30).

One of the great biblical images for sin is adultery. God is illustrated as a faithful groom who has been betrayed by an unfaithful wife. The illustration took on a literal form when God commanded the prophet Hosea to marry Gomer, a prostitute. She left Hosea to return to her former lifestyle. God told him, "Go again; show love to a woman who is loved by another man and is an adulteress, just as the Lord loves the Israelites though they turn to other gods and love raisin cakes" (Hosea 3:1). Peter is just like Gomer. He abandoned Jesus for comfort and security. Yet, in an attempt to save himself, he is devastated.

Sin will devastate all of us. It might bring pleasure or satisfaction for a moment, but the cost is substantial. Betraying God causes fracturing in our souls that leads to all the problems we face. We experience separation from the God we were meant to know and love, so we fill that void with all sorts of things. We attempt to numb the pain of a fractured soul with experiences, substances, people, and entertainment. Are all of these things inherently bad? Often, they are not, but they cannot fill the void anymore than a water bottle can fill the Grand Canyon.

You don't need to be a Christian to experience this void. If you are not a Christian, consider what drives your anxieties. Why are you restless? Does your life need to be filled with constant distraction? Are you unable to sit quietly in a room with nothing but your own thoughts? You might be running from acknowledging the gap between you and God, avoiding him by stuffing your life with pleasures and distractions.

If you are a Christian, then the awareness of your ongoing sin is sometimes unbearable. You know that you are betraying your Savior and it tears you apart to own that fact. Christians can also be avoiding the reality of their sinfulness by distraction. Acknowledging your betrayal, again, feels like death.

How does Jesus respond to the deep betrayal of his friend? His response to Peter is a response to us too.

An angel was sitting in Jesus' empty tomb waiting for the first witnesses. When the women arrived he delivered a message from Jesus, "But go, tell his disciples and Peter, 'He is going ahead of you to Galilee; you will see him there just as he told you'" (Mk. 16:7).

The words "and Peter" hit me like a ton of bricks when I first studied this passage. I can imagine Peter's emotional and spiritual state because I have been there so many times. He is probably overwhelmed with shame. His soul feels like it has been shattered. He wishes he could just hide and pretend like this never happened.

Imagine being in Peter's position when the frightened women returned from the empty tomb. "We went to Jesus' tomb, and he wasn't there! There was an angel who told us that he has risen from the dead!"

At this point, what are you thinking? You are probably thinking of how you can avoid seeing him. When there is a conflict between you and another person, your goal is typically not to see them under any circumstances. You don't go to the parties they will be at. You switch to another gym. You hide behind the produce section when you see them at the grocery store. Peter's situation has just risen in tension.

But the women continued, "He said that Jesus is going to Galilee. He wants to see all of you there." Peter is thinking to himself that surely he is excluded from this joyful reunion. Immediately after his crucifixion, Jesus could not want to see him again. Nevertheless, the women said, "Peter, the angel told us that Jesus specifically mentioned wanting to be reunited with you."

Here is theology in a narrative format. Grace is Jesus' invitation to unworthy sinners to have a relationship with him. Jesus' invitation is only extended to betrayers, defectors, and sinners. He invites the unworthy to sit at his table, just as he dined with his cowardly disciples at the last supper. His love is set upon the broken.

Peter's experience of grace was only enriched by his sin. Grace cannot be overwhelmed by sin. Regardless of how deep your sin runs, grace runs even deeper. No matter how many times you have needed forgiveness you have not exhausted the wealth of God's love and grace. Paul wrote that where sin is multiplied, God's grace abounds even more (Rom. 5:20). The love of God is not extinguished by your betrayal.

In a letter to a doubting Christian, the pastor John Newton wrote, "Our sins are many, but His mercies are more: our sins are great, but His righteousness is greater: we are weak, but He is power." Jesus has great grace for great sinners.

We have healing being offered to us, yet we so often refrain from turning to him. Why is that? It is most likely because you are believing deep down in your heart that his grace could not be that good. Therefore, you might acknowledge a general, ambiguous sense of not doing your best to God but you will not reach full repentance. Full repentance is leaping into the embrace of a loving Father. When you take that leap, and only if you take that leap, you will know the goodness, kindness, and love of God.

In his book All of Grace, Charles Spurgeon tells the story of a country pastor who remembered a poor woman in his congregation. He traveled to her house with a gift of money to aid her financial struggles. After knocking on the door, he received no answer for several minutes. So, the pastor returned to the church with the gift. To his surprise, he encountered the poor woman shortly after arriving at the church. He told her that he was just at her house with a gift and knocking on the door. She asked at what time confirmed that she was home. She didn't answer because she thought he was the man collecting her rent.

Jesus' invitation is not a demand for you to pay your debt. He does not expect to knock on the door and find a house put in perfect order. He is standing with a gift of grace, ready to bless you with forgiveness, healing, and kindness. Spurgeon wrote, "Do not refuse the Lord Jesus who knocks at your door; for He knocks with a hand which was nailed to the tree for such as you are. Since his only and sole object is your good, incline your ear and come to Him. Hearken diligently, and let the good word sink into your soul. It may be that the hour is come in which you shall enter upon that new life which is the beginning of heaven."

Aaron was recently on our podcast, Answering the Call, where he discusses developing leadership skills as a Christian in a post-Christian culture. You can listen to that episode here.

Aaron Shamp is an NOBTS alum, a pastor, and a writer. This post first appeared on aaronshamp.com.