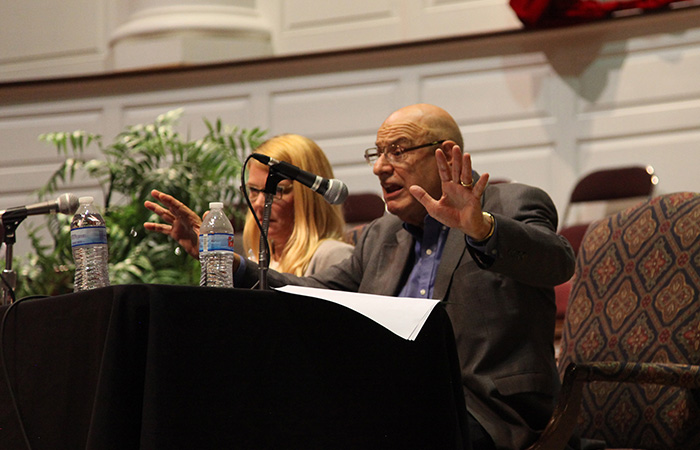 Advocates from several perspectives on same-sex marriage and LGBT rights discussed the emotionally and politically charged issues, which often pit the church against the prevailing culture, during a forum at New Orleans Baptist Theological Seminary.

The "Rights and Sexuality: Where Individual Freedoms and Civil Rights Meet" event was sponsored by the seminary's Institute for Faith and the Public Square.

Lloyd Harsch, the institute's director, noted, "What we are trying to do with the Institute for Faith and the Public Square is to provide a safe environment for rational conversation on difficult issues where we can listen to each other and find common ground." A video of the forum is available at www.faith-publicsquare.org/past-events.html.

Tony Campolo, professor emeritus of sociology at Eastern University, and SarahJane Guidry, executive director of Louisiana's Forum for Equality, advocated for acceptance of same-sex marriage and greater LGBT protections. Craig V. Mitchell, a Christian ethicist and political scientist, and Travis Weber, a lawyer with the Family Research Council, argued for traditional marriage and protections for those who oppose same-sex marriage on religious grounds. Forum organizers described the speakers as respectful, modeling civil discussion on matters of deep and passionate disagreement.

Mitchell opposed same-sex marriage by articulating the heart of the evangelical argument against the practice -- homosexuality is at odds with Scripture. However, Mitchell was clear that the church must oppose those who would mistreat LGBT individuals.

"The church is supposed to be salt and light," Mitchell said. "We need to call sin what it is; at the same time we need to show the love of Christ. We need to love the sinner while hating the sin."Mitchell acknowledged missteps by the church in its attempts to love the LGBT community while upholding a biblical view of marriage. However, he sees the stance on homosexuality as a sin as the key point of tension between the church and LGBT advocates.

While Campolo and Mitchell disagreed on same-sex marriage, the two found some common ground on the issue of church-state entanglement in marriage. The state licenses both the couple who is getting married and the clergy member who conducts the service. It is the clergy member, Campolo said, who solemnizes the union. Yet in America, these functions are mingled together.

"If you want to get married in Amsterdam you go down to the city hall and you register and a civil ceremony takes place," Campolo said. "If you want a religious blessing, you then go to the church and the minister or the priest blesses the relationship. Separating the two things solves all the problems."

"No one likes to be called a sinner, yet every one of us is," Mitchell said. "It is the job of the church to remind people."

The tension between the church and the state was evident throughout the discussion -- especially regarding the cases of bakers and wedding photographers who refuse to accept commissions for events that violate their conscience.

Weber said the religious freedom laws in the country have not changed but the way the LGBT community responds to those laws is changing. There is a growing conflict between traditional Judeo-Christian beliefs on sexuality and "those who believe in self-centered, individualized sexual autonomy detached from any outside moral framework," Weber said.

"Jack Phillips [a Christian baker in Colorado] was happy to provide items from his bakery to anyone who walks into his shop regardless of what they claim to be their sexual orientation," Weber said. "He just didn't want to provide a cake for the [same-sex] wedding ceremony."

For Weber, Phillips' refusal should be protected because it is clearly based on his own moral and religious beliefs. The objection did not infringe on the couple's ability to have a cake at their ceremony. Many other bakers were willing to accept the commissions for same-sex ceremonies, Weber said.

"There's no reason to force those who have a conscience objection to being involved in [the ceremony] ... to be implicated against their conscience," Weber said. "The way forward is to recognize the religious rights of these individuals."

"That baker is operating with a license that was granted by the state," Campolo said. "The state represents what? All the people. If the privilege of baking cakes is given by all the people, then all the people should have access to the service that is provided."

Guidry also disagreed with Weber on the issue of private businesses. She affirmed the right of individual clergy members and churches to decide what marriages they choose to solemnize. However, she argued that individual protections do not extend to individual business owners or to elected officials tasked with granting marriage licenses.

Conservative lawmakers in several states have sought new laws to clarify religious freedoms and protect business owners who have moral objections. Guidry called such laws a "license to discriminate" against the LGBT community.