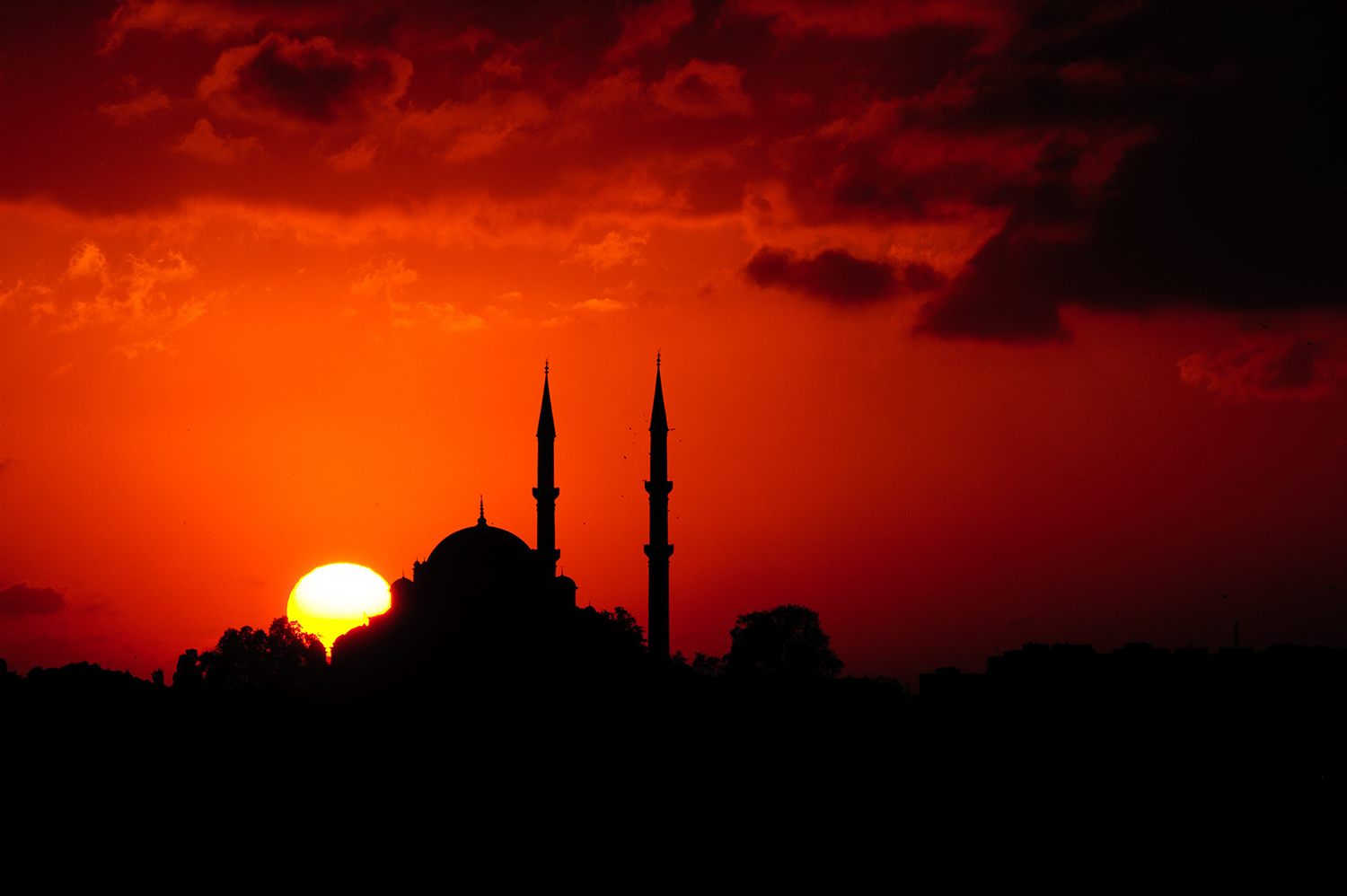 True Salam: Offering the Peace of Jesus to Muslims
By Marilyn Stewart

Growing up in America with a Muslim father and a Christian mother left NOBTS student Debbie Pierson* confused about what God is really like. Does he require unquestioned submission to his will, as Islam taught? she wondered. Or is He the God of the Bible who freely gave His Son to rescue humanity from sin?

For Pierson, salvation came down to a choice between a “God who takes” and a “God who gave.”

Sitting in her bedroom one night as a young teen, Pierson knew what she had to do. “There is only one person who can take my sins away,” she decided. "Only Jesus can do this.”

Answering God’s call brought Pierson to New Orleans Seminary where she studies missions in the Master of Divinity (M.Div.) program. At NOBTS, she joins other students in sharing the Gospel with those who have come from distant shores. With two mosques in the city—one on each bank of the Mississippi River—the Muslim population in New Orleans is growing. As Pierson and other NOBTS students reach out to their Muslim neighbors, they find a listening ear.

Dr. Mike Edens, professor of theology and Islamic studies, notes that many Muslims have never known a Christian willing to live out the faith in a genuine, “incarnational” way. For Muslims, God is not so much a loving Father as he is the One to whom they must submit, who calls on followers to bear up under whatever choices he makes.

“How sad to have no assurance of God’s interest in you,” Edens explained. “How different the Gospel is that says, ‘I go to prepare a place for you’ … that says ‘I came not into the world to condemn the world but that the world through me might be saved.’ How different is the Triune God who is complex in his essence and yet bonded together in love.”

Around the globe, Muslims are coming to faith in Christ in unprecedented numbers, but in Western culture, the trend does not hold. That can change, Edens points out.

The need is great. The opportunity is here. Will the body of Christ respond?

For M.Div. student Ryan Melson and his wife Michelle, their first contact with Muslims was at home in Alabama before the family’s move to the New Orleans campus. Ryan Melson leads Westbank Baptist Church, a church plant in the New Orleans area that sits adjacent to a quickly growing Muslim community.

While in Alabama, the couple led an Iranian husband and wife to faith in Christ through a friendship that developed at Michelle’s workplace. A second friendship at work, a Moroccan woman, deepened as Michelle walked beside the young Muslim wife as she endured three miscarriages. The shame of not being able to bear children was followed by further heartache when the husband proved unfaithful. Now in New Orleans, Michelle stays in touch and continues to share with her friend the good news of a God who loves unconditionally.

After their move to the seminary, the Melsons longed to reach out to other Muslims with the Gospel, but didn’t know where to begin.

“Our ‘big’ strategy was to find where they are and start conversations,” Melson explained. “That’s all we knew to do.”

The Arabic greeting meaning “peace be with you” that Ryan Melson often uses drew startled looks at first from the Muslim men he met, but today they welcome him in. “The fact that you take the effort to know that much, that’s a big deal,” Ryan Melson said. “It can be a huge entry way into starting conversations.”

During Ramadan, Melson’s congregation prepares baskets of dates, nuts and fruits for Muslim friends to enjoy at sundown when the daily fast is broken. Two years ago, church members left the baskets at popular restaurants and grocery stores. This year, the congregation delivered 200 baskets to the local mosque where Muslims from Palestine to West Africa to Ubekistan attend.

When Melson invited the imam and his family to his home for the “breaking of the fast” at sundown, the imam turned the invitation around, inviting Melson and his wife into the mosque to share the evening meal. At the imam’s encouragement, Melson brought friends from church, including some women members. Publicly, the imam welcomed them as “our friends from Westbank Baptist Church.”

The result was an opportunity to talk about Jesus.

“The women were very, very engaging,” Michelle Melson said, explaining that a woman read from the Quran a passage that spoke of Jesus and Mary, then asked them directly what they believed. “In the mosque,” Michelle Melson recounted, “we talked about Jesus.”

When volunteer mission teams come to New Orleans to serve, Melson takes them into restaurants run by Muslim friends. He sees it as a “win-win” situation, providing patronage for Muslim entrepreneurs while giving Christians the opportunity to engage Muslims, often for the first time. Mission team members light up when they realize, “This is something we can do back home.”

While some in the west fear Muslims, the feeling can be surprisingly mutual. Coming from a world where religion is melded with national identity, Muslims are confused by a culture unhinged from religious belief. For Muslims, America’s sins as a nation are thought of as a failure of Christianity.

While Muslims are wary of Americans or Western culture, their beliefs about God are tinged with fear as well. Muslims speak of hoping their good deeds outweigh their bad on the day they stand before Allah in judgment. They hope Allah will accept them.

“They say God is merciful and that he forgives, but they also fear God in a bad way, not because he is holy,” said Autumn Miller, a mission students in the M.Div. program. “They believe the end times are near and it makes them afraid.”

Don’t be afraid to make contact, Melson urges. “You love people, you pray for them, you ask God to work in their hearts and to show you where he’s at work, and then you join him.”

WHY NOW IS URGENT

Arguing theology or a point of doctrine with a Muslim is often just that, nothing more than a debate, Pierson pointed out. But telling a story is different.

“When I say, ‘Let me tell you a story about a woman who bled for 12 years and then touched the hem of Jesus’ clothing,’ they stop. They listen,” Pierson said. “Their Quran is not written in story, but they’re oral learners and they love stories.”

Reaching Muslims involves scaling the historical, emotional, and theological walls that divide Christians and Muslims. Websites such as www.godsstories.com tell God’s story in a form that Muslims will listen to and provide a model for Christians in sharing the Gospel.

The chance that a terrorist would enter the country in the guise of a refugee is miniscule, Edens insisted. Even so, a greater danger exists.

Edens tells the following story every opportunity he gets: Sayyid Qutb came to America in 1947 and returned home to Egypt three years later, having had no real engagement with the Gospel. Years later, as he awaited execution in an Egyptian prison, Qutb penned a multi-volume commentary on the Quran, In the Shade of the Quran.

“That commentary is the commentary on the Quran that Osama Bin Laden studied, that Baghdadi the Caliph of the Islamic State studied, that Boko Haram leaders have studied,” Edens said. “Every fundamentalist Muslim in the world today is a student of Sayyid Qutb.”

Christians failed to engage Qutb for the Gospel and the impact is felt worldwide, Edens pointed out. He wonders, What if Christians had not missed that opportunity?

“If the world stands, there’s a Sayyid Qutb in our midst today,” Edens asked. “What are we going to do about it?”