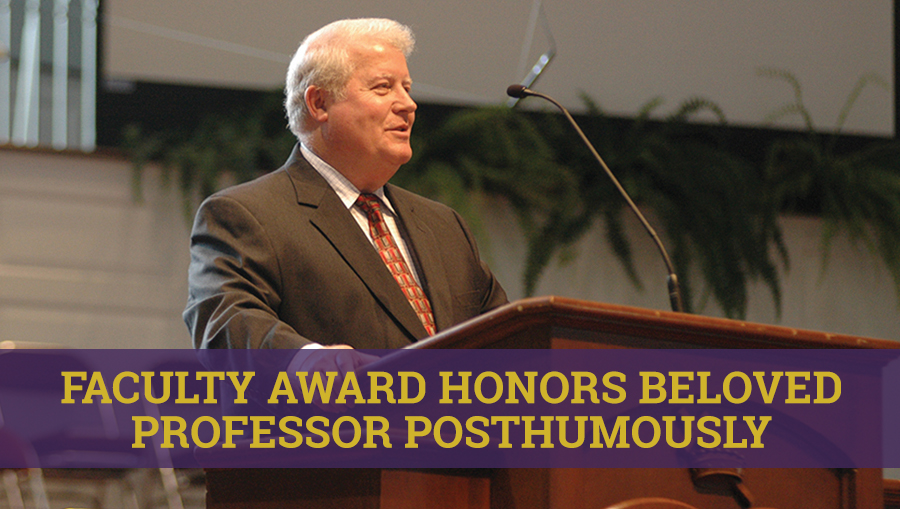 A beloved faculty member was awarded the top classroom teacher award posthumously at the Celebration of Excellence chapel service at New Orleans Baptist Theological Seminary, May 8.

Norris Grubbs, NOBTS provost, noted that Barlow had previously refused the nomination, insisting he not be considered for the teaching award while serving as graduate dean.

Grubbs praised Barlow, whose ministry in churches spanned 43 years, for his steadfast example in the pulpit and classroom.

“Jerry Barlow always stated that his first calling was to teach,” Grubbs said. “Not only was he called to teach, but also he was gifted to teach. All of us who sat under his teaching were both informed and inspired.”

Active in state and denominational work, Barlow served 15 years as pastor at First Baptist Church, Franklinton, La., prior to coming to NOBTS, and co-authored “Equipped for Good Work: a Guide for Pastors,” a primary textbook for pastoral ministry courses at the seminary.

Lynne Barlow, wife, daughter Cathy Edmonston and three grandchildren were present for the presentation. A standing ovation was given in Barlow’s honor.

The Ola Farmer Lenaz grants for faculty research and writing were awarded to: Lloyd Harsch, for research to be presented at this year’s Oxford University Symposium on Religious Studies on the gender identity and sexual orientation movement’s impact on religious liberty; and David Lema whose research on the relationship of a pastor’s personal revitalization to that of church revitalization comes at the request of the Evangelical Baptist Community of Spain.

Published works by faculty include “Together We Equip,” edited by Jody Dean and Hal Stewart; “Infants and Children in the Church,” co-authored by Adam Harwood; “Etiquette and Taboos Around the World,” co-authored by Ken Taylor; “Stevens Greek Workbook,” by Gerald Stevens; and “Fuel the Fire,” by Chuck Kelley.