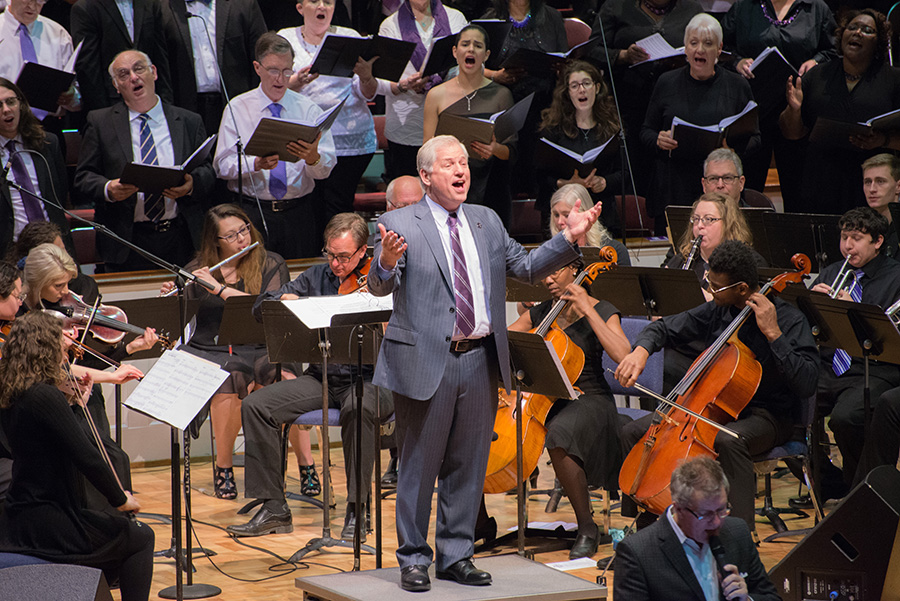 God’s enduring faithfulness throughout New Orleans Baptist Theological Seminary’s 100-year history is the inspiration behind a musical commissioned for the school’s centennial celebration.

While record enrollments, rapid growth and cutting-edge integration of ministry and education mark the school’s history, so also do struggles brought on by an influenza outbreak, economic downturns, and hurricanes.

“Our Faithful God,” written by NOBTS alumni Mike Harland and Chris and Diane Machen, debuted March 8 at NOBTS’ Leavell Chapel. Musicians from a dozen congregations from Alabama, Mississippi, and Louisiana made up the 150-member choir and orchestra featured in the evening presentation.

“One hundred years ago, the Southern Baptist Convention decided to create a seminary from scratch and to put it in the city of New Orleans, a city that had very few Baptists,” Kelley said in opening remarks. “They knew New Orleans would be a great laboratory to train people God was calling into ministry and service.”

Noting the event constituted the largest group of musicians ever gathered at the seminary chapel, Kelley quipped, “What else could we do but have a great big celebration?”

Founded as the Baptist Bible Institute, the seminary’s first president dubbed the school “a child of providence and prayer.” An influenza outbreak closed the school for weeks in 1918, days after opening, proving to be the first of many struggles as the seminary weathered war, economic downturns, and storms.

“We’re here tonight to let you know no matter your plight, no matter your situation, no matter your circumstance, God has promised that He will be with you,” Luter said. “He will never leave you, nor will He ever forsake you because He’s our Faithful God.”

A prerecorded testimony from Quell Jenkins, NOBTS/Leavell College student who was paralyzed as a teen, played during the theme song, “Our Faithful God.” Shot three times at age 17, Jenkins forgave those who had hurt her after coming to faith in Christ.

“I know I have Jesus and I know that no matter where I may go or where life may take me that He is going to be there with me,” Jenkins said. “I’d rather be in this wheelchair with Christ than to walk without Him, any day.”

Kelley spoke also in a prerecorded testimony of Hurricane Katrina, 2005, and watching from his hotel in Birmingham as pictures of the flooded NOBTS campus filled the television screen.

“As I sat there watching these unforgettable scenes, old words, ancient words from Psalm 46 began to fill my mind and my heart as God began speaking into me,” Kelley recounted, saying, “‘God is our refuge and strength, a very present help in trouble. Therefore we will not fear…’”

The musical’s theme song includes the line, “Our faithful God, true to the end; He’s been faithful before, He’ll be faithful again.” Chris Machen, in an interview, said the words reflect personal lessons he and Harland learned as their wives, Diane Machen and Teresa Harland, each walked through significant health issues years ago.

“One of the things that carried us through was that the Lord’s been faithful in the past, He’ll be faithful again,” Chris Machen said. “‘Trust Him right now’ was always at the forefront of our minds.”

Kelley concluded the program by thanking the chapel audience for their prayer support and financial investments in equipping pastors and missionaries to carry out the Great Commission.

“The story of this school, the school of Providence and Prayer, is not simply the story of our school. It’s your story,” Kelley said. “What God has done for and with and through NOBTS continues to be a living illustration of what God wants to do for, and with, and in you.”