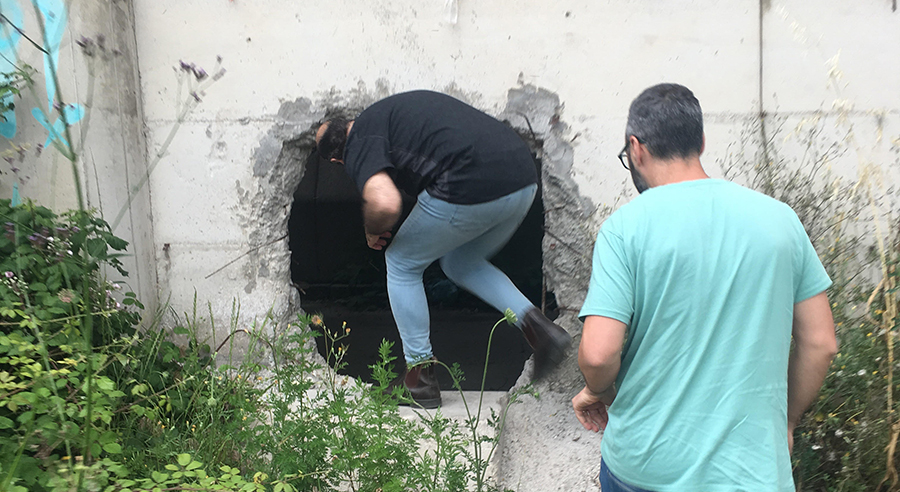 The hole in the wall was big enough for three grown men to crawl through, but it opened into a place they didn’t belong. Used syringes littered the floor, evidence of what went on there in the dark.

The NOBTS team was in Italy, May 22-June 1, caring for Muslim immigrants who live in dire conditions and often face persecution.

Pieri’s team that day included Giovanni Cappelo, director of Italy’s Christ is the Answer International, and Robert Savo, director of “The Savior Film,” a film telling Christ’s story through the lens of an Arab worldview. In Italy, the NOBTS team worked with international partners and the International Mission Board.

Pieri peered into the pitch-blackness, unable to see his hand in front of his face. Each step was unnerving, yet Pieri was willing to follow Cappelo's lead. The Italian partner was convinced of two things--Muslim immigrants were living inside and God intended for the men to find them.

In a place piled with garbage and human waste, God was at work. Though Pieri didn't know it at the time, God was about to reveal something so amazing Pieri could only describe it later as "unbelievable."

Savo, an Israeli, called out a greeting in Arabic as the team picked their way through the filth and darkness. They were met with silence.

The men had turned to leave when a voice spoke out of the darkness. *Abdul, a Middle Eastern Muslim, stepped out the shadows. Pieri felt a chill knowing Abdul had been watching them the whole time.

“Most people were too afraid to go into this building,” Pieri said. “Abdul was afraid of us and wondered, ‘Who are these men? Why would they be here?’”

Savo had engaged Abdul in Arabic briefly when the conversation took a dramatic turn. Abdul confided in the men about his terrifying dream the night before in which a “mighty white light” told him three men of peace were coming who would tell him the Truth.

“When he said that, Robert went immediately into the Gospel,” Pieri recounted.

Savo explained that Jesus was the Truth the voice was talking about. As Savo shared the Gospel, Abdul came to faith in Christ.

The timing of the team’s visit deepened in significance when Abdul showed the men his “home,” a corner with cots for his wife and three children, and explained he had saved up enough money to take his family out for a meal at a restaurant that afternoon. Instead, Abdul felt compelled not to leave the building.

“The whole event was precisely orchestrated [by God] and there is now a new brother in Christ,” Pieri said. “When God does something like that, it’s really hard to put it into words. Words don’t do justice.”

Astounded at what God had done, the team left “praising God and thanking Him for allowing us to be a part of what He is doing," Pieri said.

A local evangelical pastor is providing follow-up care and welcoming Abdul into his church attended by other Muslims who have come to faith in Jesus.

RAMADAN: AN OPPORTUNITY FOR THE GOSPEL

Ramadan, this year observed May 15-June 14, is a time Muslims seek a spiritual experience with God.

Mike Edens, professor of Islamic studies at NOBTS, said the team of 14 members chose to come during Ramadan because it presents a unique opportunity for sharing the Gospel. During the annual observance, Muslims have a “heightened sense” of seeking God’s guidance, Edens explained.

Edens noted that the Fattah, the first Surah in the Quran, is recited by Muslims around the world five times daily, throughout the year. In reciting the passage in prayer, Muslims ask God for guidance in finding "the straight path."

“This gives us a real avenue [for witness]," Edens explained. "They’re asking God, ‘Show me the path that you’ve marked out for those to whom you show favor.'"

Here is where a Christian can make a connection for the Gospel, Edens said. As Edens explains to Muslim friends, "The Way of God actually has a name. His name is Jesus. God has expressed His way in Jesus the Messiah. Jesus said, 'I am the way, the truth, and the life.'"

‘VISIONS ARE NOT ENOUGH’

Back home, Matthew Bryant, a Ph.D. student at NOBTS, shared Pieri’s experience with Abdul with his pastor, Chad Gilbert (M.Div. 2007). When Gilbert related Abdul's story to the congregation at New Orleans' Edgewater Baptist Church, he noted a key component.

“My pastor pointed out that we believe in a proclaimed Gospel,” Bryant explained. “He said, ‘Unless we proclaim, they will not believe. Someone has to go and tell.’”

Opportunity to tell is abundant as Muslims leave their home countries and find themselves outsiders in a strange world.

Byron Cutrer, NOBTS master’s student, related how his team was viewed with alarm outside a mosque in Italy, but inside, the imam welcomed them with gifts. A Tunisian, the imam informed Cutrer people's attitudes toward Muslims changed after the events of September 11, 2001.

“He told us he’d been [in Italy] 30 years,” Cutrer said. “He remembers how hospitable people were before 911 and how people welcomed them in. After that, there was fear and suspicion.”

Cutrer asked the imam what American Christians could do to welcome Muslim neighbors. His advice was simple.

“The imam asked for kindness and understanding,” Cutrer said. “He encouraged us to be understanding, generous, and fair to people in our own cities and neighborhoods.”

Edens sees God at work, moving among the Muslim people. While God is speaking to Muslims in dreams and visions, “visions are not enough,” Edens pointed out. Someone must go and tell.

"Obedience is key," Edens said with urgency. "God is calling people to Himself. We need to join Him."

An NOBTS team will return to Italy March 16-23, 2019. For information, contact Mike Edens at medens@nobts.edu.