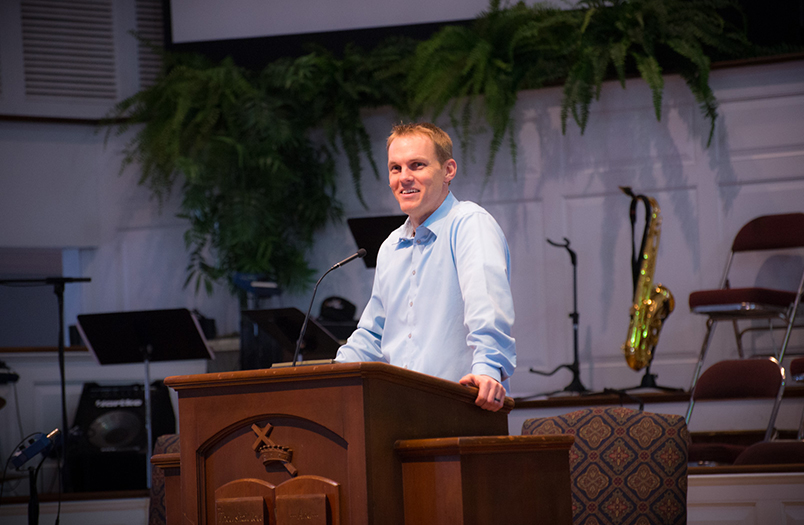 Platt: Sharing the Gospel is God's will for believers
By Marilyn Stewart

Many believers struggle to "find" God's will, David Platt said in chapel Feb. 1 at New Orleans Baptist Theological Seminary. But he added, "God's will is not something to be 'found.'"

Platt, current president of the International Mission Board, spoke at the NOBTS Missions Emphasis Day and referenced 2.8 billion people who have little or no knowledge of Jesus. Platt recently announced that he will leave IMB as soon as a new president has been identified. He intends to return to full-time pastoral ministry.

"God has [already] clearly revealed His will to us. He has made it clear what He wants us to do," Platt said. "He wants us to take the Gospel to them."

Drawing from Acts 16, Platt pointed out that the Holy Spirit "redirected" the steps of Paul and Silas on the second missionary journey and prevented them from speaking in Asia. The redirection marked "a history-making turning point," Platt said, and set the course for the spread of the Gospel across Europe.

The biblical text doesn't explain how the Holy Spirit led the missionaries, Platt said. He asked, "Was it an impression? An audible voice? Circumstances?"

Believers considering international missions want to know God's will and want to follow the Holy Spirit's leading, Platt said, but often struggle to be sure.

Platt noted that the biblical account includes the redirection of the missionaries' plans, driving out a demon, opening converts' hearts, and sending an earthquake.

"God did that," Platt said, adding that God directed the details of their journey as Paul and Silas faithfully shared the Gospel.

"It's in the context of active obedience to God's command that God directs their steps," Platt said. "They're not sitting back asking what God's will is. They know God's will. They're walking with God in it. They're trusting God to direct their steps as they do it. The same is true in our lives."

While believers are called to live on mission wherever they are, billions will die without Christ unless someone takes the Gospel to them, Platt said. The truth that "leaps off the pages," Platt said, is that God leads as believers follow in obedience.

"As we walk with God, He directs the details of our lives for the accomplishment of His will and the spread of His worship in the world," Platt said.

Finding God's will comes from spending time in study of, meditation on, and memorization of Scripture, Platt said.

Platt acknowledged the suffering Paul and Silas experienced and noted that believers today may endure hardship for the sake of the Gospel.

Platt challenged listeners this year to take a mission trip or cross a barrier to someplace unreached by the Gospel and then ask God if He wants them to stay. Platt told of sharing the Gospel along the Amazon River and seeing people moved by the beauty of Christ, adding, there are "few joys as great as introducing someone to Jesus," Platt said.

To the ends of the earth

NOBTS President Chuck Kelley introduced Platt and told of Platt's heart for missions while a student and while serving on faculty at the seminary years ago.

"This is a man who is absolutely committed to the priority of the Great Commission and the burning need, the moral need, for us to take the Gospel to the ends of the earth," Kelley said.

Kelley also pointed to the founding of NOBTS 100 years ago as a missionary training center when Southern Baptists voted as a convention to found a school in New Orleans. Though few Baptists were present in New Orleans at the time, Kelley said the convention believed the setting "would provide a model for the then-Foreign Mission Board (now International Mission Board) to know how to start a seminary in a foreign country."

Kelley noted, "We were the ends of the earth for the convention in that day."