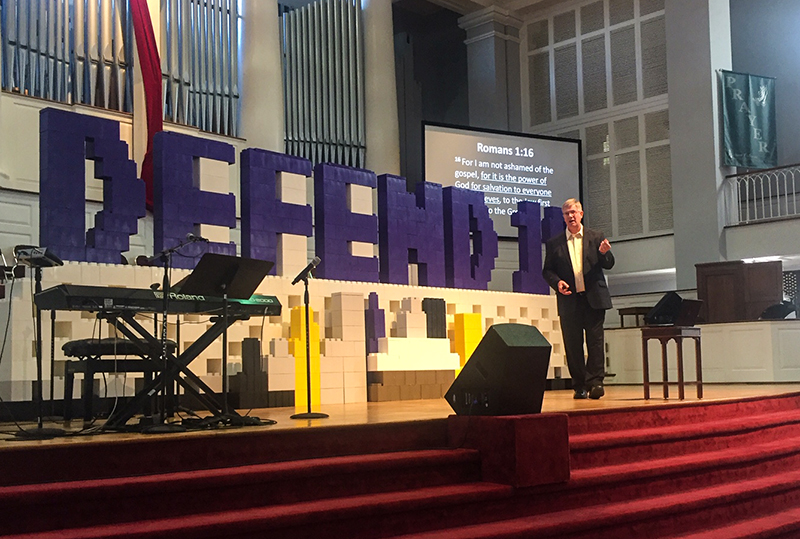 Plenary speakers included NOBTS visiting professor Gary Habermas, a renowned author and leading resurrection scholar; Frank Turek, co-author of the bestselling book “I Don’t have Enough Faith to be an Atheist”; Chris Brooks, pastor and radio host of the popular “Equipped with Chris Brooks”; Abdu Murray, a former Muslim serving with the Ravi Zacharias International Ministries, Lisa Fields, founder and president of the Jude 3 Project, and others.

“Christians have always needed to be able to state what they believe clearly and to defend their faith when asked to give a reason for the hope that they have in Christ,” said Defend director Robert Stewart. “But today in our post-modern, post-Christian, post-truth culture it is especially important that we be winsome ambassadors for Christ that share the truth in love in the power of God’s Spirit.”

Turek, a popular apologetics speaker and president of CrossExamined.org, told the audience that the truth of the Christian faith centers on four questions: Does truth exist? Does God exist? Are miracles possible? Is the New Testament true? If the answer is “yes” to each question, then the Christian faith must be true, Turek explained.

Going further, Turek explained that people more often reject God for emotional reasons rather than for lack of evidence.

“Most people are not looking for the truth, they’re running from it,” Turek said. “But the only way to find happiness is straight through truth. Jesus is truth.”

Turek posed the cosmological, teleological (fine-tuning), and the moral arguments to show that God exists, adding that only the good and perfect God of the Bible can be the basis for the human sense of morality.

Regarding miracles, Turek used the analogy of the seal produced by a king’s signatory ring to say that miracles show the biblical message is authentic, noting “miracles confirm the message.”

“Not believing in a miracle because you haven’t seen one is a bad reason,” Turek explained. Noting as examples justice, love, and the immaterial laws of logic, Turek added, “There are a lot of things you believe in that you haven’t seen.”

Turek concluded his second plenary session Thursday morning by pointing to evidence supporting the New Testament, including: early sources, eyewitness details, stories considered embarrassing that indicated the stories are true, and the presence of undesigned coincidences between the Gospels that undergird and confirm the Gospel accounts.

Chris Brooks, senior pastor of Evangel Ministries, Detroit, and the author of “Urban Apologetics,” in his plenary session Thursday evening addressed the need for Christians to speak to secular culture and bridge the “cultural divide.”

“This is a skill Christians need to consider seriously and strive to master if we’re going to be effective,” Brooks said.

Brooks stressed the need for believers to be “salt and light” in culture and presented a four-part plan of action for approaching those of different worldviews.

Brooks said believers must: listen to others to learn what they believe; understand that others believe they are right when they act; look for points of agreement while understanding that agreement is not condoning; and then find the best path forward to communicate.

To extend grace and speak truth to the culture, Brooks said God will use people “who will think critically and live compassionately.”

In honor of the initiation of the Will Jackson Defend the Faith Scholarship Fund, a plaque was presented to the Jackson family during the opening evening session. William Jackson III, a NOBTS master of arts in Christian apologetics graduate (May 2018), passed away Nov. 14, 2018 at the age of 29.

Dr. Stewart noted the reason for founding a scholarship in Jackson’s memory.

“Will Jackson was the model of what we want all our apologetics graduates to be: a leader in his church who lovingly shared his faith and backed his talk up with reasons and evidence,” Stewart said.

For information or to contribute to the scholarship fund, visit nobts.edu/donate.