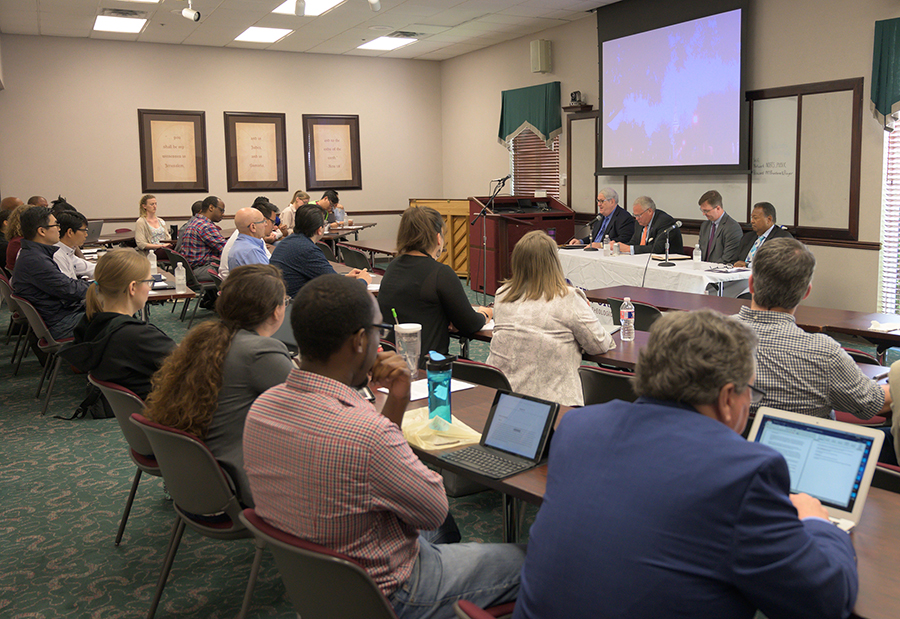 A May 6 workshop, "Faculty Hiring 101," marked a key step toward that goal, offering practical tips for those sensing a call to teach in a Baptist institution.

About 25 students from a variety of ethnic backgrounds including African American, Asian and Hispanic attended the event. About a third of the attendees were women, more than half of whom were white.

The group included students at all stages of study in the master's and doctoral programs at NOBTS. Most were either master's students considering doctoral work or students in the early stages of doctoral study.

Presenters discussed the preparation for academia, the doctrinal expectations of Southern Baptist schools and institutional fit as well as practical matters like developing an academic resume.

Informal conversations like these take place between professors and students on a daily basis. Some of the NOBTS academic divisions host doctoral recruitment events which cover some of the same ground. However, Kelley created the intentional workshop with the idea of increasing the number of minority Ph.D. students, since raising up more minority graduates is the first step toward increasing the pool of qualified minority applicants for future faculty openings at institutions across the SBC.

In addition to Kelley, other keynote presenters included Rick Brewer, president of Louisiana College, and Ken Weathersby, vice president for convention advancement at the SBC Executive Committee. Weathersby, who was the first African American to serve on the NOBTS faculty before joining the EC staff, offered a unique perspective of a "trailblazer" in faculty diversity. Norris Grubbs, provost at NOBTS, and Sandy Vandercook, associate dean of Leavell College, also led sessions during the four-hour workshop.

Kelley began the workshop by acknowledging the failures of the Southern Baptist Convention and New Orleans Seminary in the treatment of minorities. He said both the convention and the seminary made sinful decisions on race early on.

"The Southern Baptist Convention got off to a horrible start. In part, it was created as a defense of slavery," Kelley said. "Could there be a more horrible moral and ethical decision?"

At its founding, NOBTS excluded black students. Later, the seminary rescinded that decision and began accepting African Americans in the 1950s.

"As I look across the whole landscape of the Southern Baptist Convention and Baptist institutions, it is a very different day," Kelley said.

Brewer offered the perspective of Baptist liberal arts colleges where many future seminary professors hone their teaching skills. During his time at Louisiana College, Brewer said he had worked to bring diversity to the school's leadership and faculty.

"I want to see that grow," Brewer said. "That's our student population, that's the world in which our students are going to serve and that's who we are as Southern Baptists.

"Anyone worth their salt in SBC leadership is seeking minority candidates for faculty and administrative roles," Brewer said.

Weathersby, who taught church planting at NOBTS, shared how he would approach a faculty role as a minority, especially in an institution that is not very diverse.

"If God is calling me to serve in an academic institution, I know I am there for a purpose," Weathersby said. "I have the responsibility to be used as 'salt and light' and model Christlikeness so more minorities can be added to the faculty based on the way I lead."

Weathersby acknowledged the challenges minorities face on majority white faculties. However, the opportunity to open doors for others and be a "different voice" is worth the challenges, he said.

Kelley and Brewer talked about the importance of working hard as a student and networking with faculty members. They encouraged the students to get to know the professors and academic leaders on their campus and to take opportunities to work with faculty members on writing and research projects.

"Be sure every one of your professors knows you by name and knows who you are," Kelley said. "If you have an opportunity to do adjunct teaching, take it."

Brewer encouraged the students to leverage every opportunity they have been given to get to where God is calling them. In addition to developing classroom teaching skills, Brewer cited the importance of developing skills in education technology as more and more instruction is moving online.

Kelley, Brewer and Weathersby discussed the importance of doctrinal statements and institutional fit. All SBC seminaries and many Baptist colleges require professors to teach within the Baptist Faith and Message 2000. Outside of the BF&M, Baptist schools vary when it comes to guiding documents. Most also have doctrinal statements for professors. At NOBTS, professors must sign "The Articles of Religious Belief," a doctrinal statement created by the first faculty in 1918.

The speakers encouraged students to be informed about additional documents such as the Chicago Statement on Biblical Inerrancy, the Danvers Statement on Biblical Manhood and Womanhood and the Nashville Statement, a recent document affirming biblical sexuality. Grubbs encouraged the students to familiarize themselves with a particular school's doctrinal statements and guiding documents before beginning the application process for a faculty position.

Since Kelley launched the Different Voices Initiative, NOBTS has been more intentional about increasing the number of minority speakers to chapel and other campus events. Minorities also have led several of the seminary's key conferences during the past year, including the 2018 and 2019 Defend apologetics conferences and the 2018 Caskey Center No Restraints Conference.