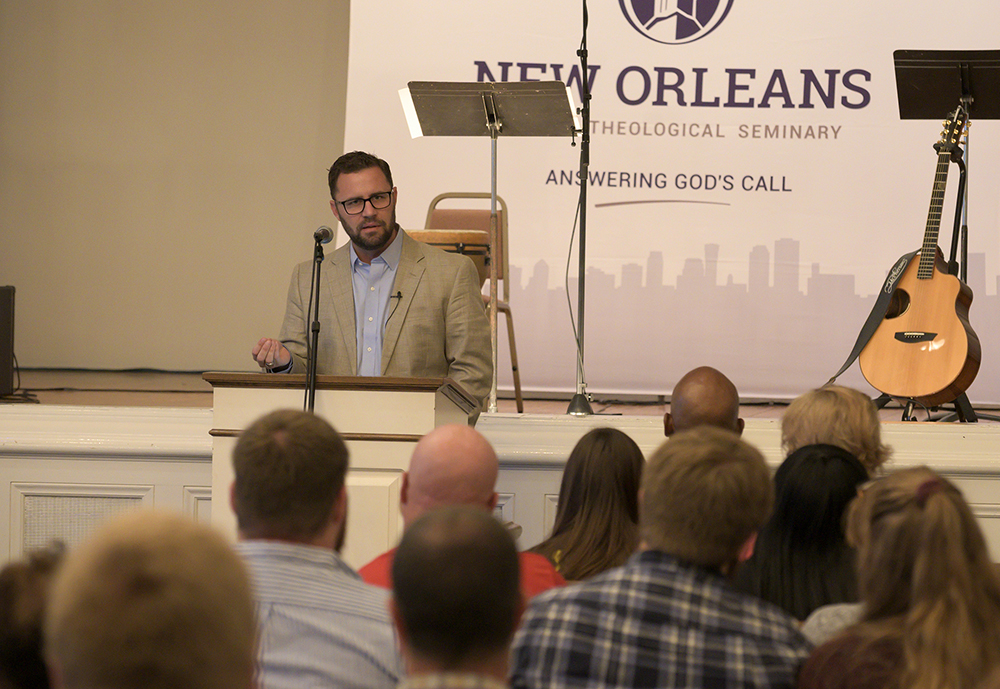 Engaging cities for the Gospel was the focus of the one-day event "The Gospel and the City" at New Orleans Baptist Theological Seminary Oct. 24.

Jamie Dew, NOBTS and Leavell College president, pointed to the importance of engaging cities even when they seem overwhelming or outside believers' "comfort zones."

"The cities are the population centers of the world, where 55 percent of the world's population resides," Dew told participants. "We can make a maximum impact on the world when we go into the cities."

Dew stressed the importance of rural congregations, but noted that urban centers cannot be ignored because of the presence of media outlets, sports organizations and art communities in cities that shape the culture. Dew added, "Why would we not engage them and try to make a difference for Christ?"

A biblical mandate to engage cities is modeled by Old Testament prophets and by Paul and Jesus, whose ministry led Him to Jerusalem, the cultural center of His day, Dew said. Dew drew a "cultural mandate" from God's command in Genesis 1 to have "dominion" over the earth and cultivate a culture that brings glory to God.

The way to engage cities, Dew said, is to make the city "home" and live out the faith in service to others. Because New Orleans is a unique urban center, it provides rich opportunity for service and learning, Dew said.

"If you can do ministry here, you can do it anywhere," Dew said. "I can't think of a better place to prepare for Gospel ministry."

George Ross, North American Mission Board (NAMB) Send City Coordinator and NOBTS assistant professor of church planting and evangelism, spoke in Leavell Chapel as part of the event. Ross explained that New Orleans was selected as one of the 32 North American "Send Cities" because of its "high level of lostness, high density of population, and high level of diversity."

Expressing thanks first for rural and suburban churches, Ross noted that "much of the work we see happening in New Orleans is a result of their faithful participation" in God's Kingdom.

Ross urged listeners to be "everyday missionaries" and to see their circumstances and location as part of God's sovereign plan. Pointing to Jeremiah 29:1-14, Ross said God calls His people to live life on mission even when in exile, adding, "The exiles were not captives; they were missionaries."

Ross gave four imperatives for living as everyday missionaries in a post-Christian culture. Believers must: embrace where God has placed them; resist the American dream of comfort and consider ministry in the city; allow the Gospel to give confidence and courage to take risks and serve in hard places; and respond to the commission God gives.

Haynes said living in the community helps to build relationships and open doors. Casual conversations and asking questions can lead to spiritual topics and then to Gospel conversations, Haynes explained.

More than 2,500 Gospel conversations have been recorded in the community in the last four years, Haynes reported, with only six resulting in commitments to Christ. Haynes pointed out that half of the conversations resulted in ongoing relationships.

Kay Bennett, a NAMB Send missionary and executive director of New Orleans' Baptist Friendship House, pointed to how the center's 75-year service to women in transition has led to open doors for the Gospel. Bennett spoke on the center's role in helping the homeless and a partnership with the FBI in helping those caught in human trafficking.

"Vulnerability is what makes someone susceptible to being lured into sex trafficking," Bennett said, noting that victims have been robbed of their self-esteem. Through the Gospel, "the church can help build back what someone has lost," Bennett added.

Other speakers included NOBTS professors, church planters, and church leaders on topics such as reaching urban millennials, a biblical theology of the city, healthy children's and youth ministry in the urban context, "exegeting" your community and its needs, embracing diversity in church leadership, apologetics for the urban context, sharing the Gospel in a pluralistic city and others.