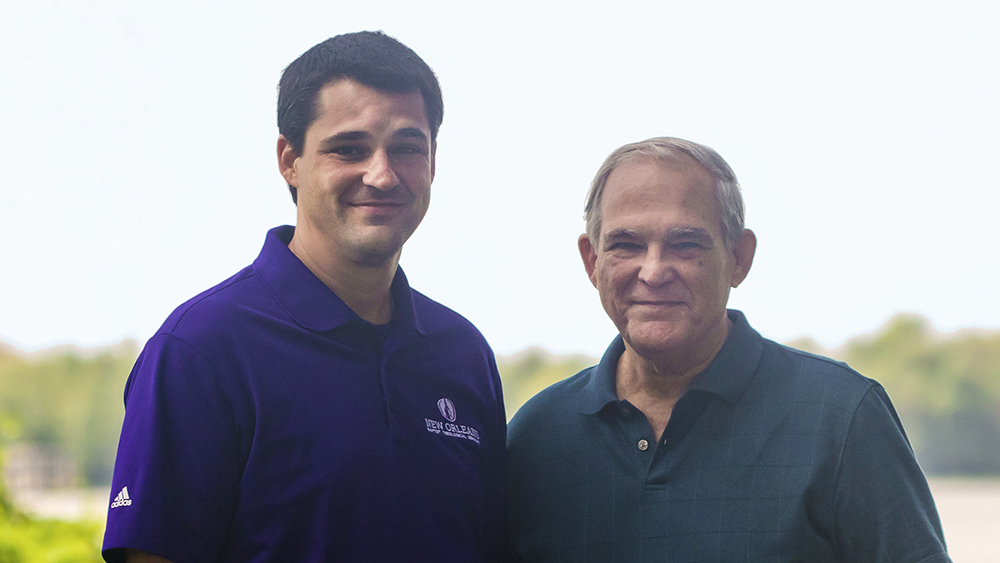 If you’re looking for Dr. Charles A. Ray on campus, you better be sure to say which one you mean.

“You must be Dr. Ray’s son – you look just like him,” is a comment Charles A. Ray III frequently hears.

While the two Charles A. Rays are a father-son duo, the “III” at the end of the son’s name points to another generation, and there, the list of NOBTS connections grows longer.

Charles Ray Sr. came to NOBTS following his service in WWII and married his college sweetheart, Mary Elizabeth, at a ceremony held on campus at the school’s original location in the Garden District. While her husband attended class, Mary Elizabeth worked as secretary to Dr. Roland Q. Leavell, NOBTS’ fourth president.

Fifty years after receiving his doctoral degree, Charles Ray Sr., at age 86, joined his son on the graduation stage in 2008 to place the doctoral hood on his grandson’s shoulders. The moment marked another family milestone—each had earned their NOBTS master’s and doctoral degrees back-to-back.

The family connections to NOBTS don’t stop there, but includes also uncles and cousins that are alums.

“I’m grateful for the heritage. We have a long history at this institution,” Charles Ray III said. “As you get older, you appreciate that more. I see how blessed I am.”

Charles Ray III knows what it’s like to be a pastor’s kid, a missionary’s kid, and a professor’s kid. He was 11 when his family returned from the mission field in Korea so his father could join the faculty.

As he and wife Lisa raise their three children—ages 13, 12 and 10— now on campus, they value the safe environment and the connections it affords.

One biblical truth, among many, that Charles Ray Jr. and wife Sheryl wanted their children to learn was that all people are made in God’s image. Living in Korea and then New Orleans helped communicate that lesson.

In today’s shifting culture, Charles Ray III sees the importance of helping his children develop a correct understanding of what it means to obey God and a biblical, rather than cultural, understanding of sin.

Growing up, Charles Ray III watched his parents model a deep commitment to the church, a commitment that became his own. He served 11 years as a pastor prior to joining the NOBTS faculty.

Though the path back to NOBTS to join the faculty took some unexpected turns, Charles Ray III sees now that it was all part of God’s plan, even when the path led through life’s unavoidable moments of difficulty. Pointing to James 1:2, Charles Ray III noted that believers can experience joy in the midst of trial.

“The hard times aren’t going to stop,” Charles Ray III said. “They’re going to continue to be a part of this life, but as we see God’s faithfulness demonstrated so clearly, it should cause us to say, ‘I’m going through a hard time now. I remember what happened before and I saw what God did. I know He’s faithful, so I can have joy right now as I go through this.’”

As the father and son look back to all their experiences at NOBTS, they think of God’s faithfulness, God’s timing, and His blessings on their family.

“I am truly grateful,” Charles Ray Jr. said, “for the memories, the training, and the opportunity for service that NOBTS provided me and my family.”