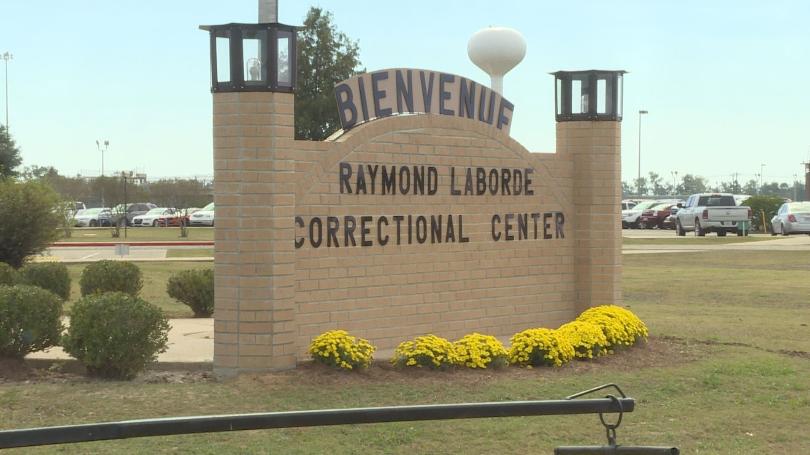 COTTONPORT, La. – Prison ministry was not on Sammy Morrow’s radar when he first received the call in August to consider joining Raymond Laborde Correction Center as a chaplain.

Morrow had served as pastor of the Alpine First Baptist Church in Tioga and then the Pleasant Hill Baptist Church in Pollock, and believed he would continue ministering in this way for the foreseeable future. But Warden Sandy McCain derailed his plans.

“I got a call out of the blue asking if I had an interest in becoming the chaplain,” Morrow said. “That wasn’t on my radar. I didn’t even know there was a prison in Cottonport.

“My wife, Paula, and I came down together and looked at everything and met with Warden McCain,” he continued. “He said, ‘We aren’t looking at anyone else and are waiting for the Lord to do this through you.’ I knew beyond a shadow of a doubt the Lord was leading me to do this.”

Since he started serving as chaplain in September, Morrow has baptized three men inside the prison’s chapel. Every time he baptizes a new believer, the entire congregation of 150-200 men celebrates the chains that have been broken from bondage to sin.

“To have these young men come to know the Lord in circumstances like this, and be baptized, is one of the greatest rewards I have reaped in ministry,” Morrow said. “If the Lord transforms their hearts and lives, they are not as likely to be repeat offenders, as is common, otherwise. We are doing our part to help them reduce their chances of coming back here, by helping them become men of God.”

More than 300 of the 1,800 inmates inside Raymond Laborde Correctional Center are involved in some aspect of ministry or biblical education. The first group of 28 men completed a 13-week spiritual formation class in December, and another 45 men began the class in mid-January. Some of the men also have taken New Orleans Baptist Theological Seminary classes since being offered at the Cottonport facility three years ago.

Two inmates from the Louisiana State Penitentiary at Angola, graduates of the NOBTS degree program there, transferred to the Raymond Laborde Correctional Center to become missionaries specifically tasked with helping set up the moral rehabilitation program.

Now, they and Morrow can see the fruit of their labor as inmates in the program have become involved in ministry at the prison, mentoring other men and even forming a praise team.

McCain, who is a deacon at New Prospect Baptist Church in Dry Prong, said Morrow’s efforts can help a prisoner better cope with prison life.

“It makes my life much easier when we have a good faith-based program,” he said. “You can take one person, someone who has taken to heart what Chaplain Morrow has taught them, and he can make such a big difference.”

Once the inmates accept Christ, some will transfer to another dormitory. This effort allows them to share Jesus to those who may not yet be believers.

“We abide by the verse ‘go ye therefore, and teach all nations, baptizing them in the name of the Father, and of the Son, and of the Holy Ghost,’” McCain said. “Our Jerusalem is right here. They go into the different areas and become a calming factor to the other inmates.

“It is fun being a part of this,” he continued. “Being in prison itself is a pretty tough road. As Christians, we have an obligation to make sure these folks are treated in a Christ-like manner. They know they are breaking men’s and God’s law. This is a place of reviving and even becoming saved. It’s a needed commodity.”

As he looks to the future, Morrow is excited about the possibilities that lie ahead.

He hopes to offer additional upper-level spiritual formation classes and establish a library and study hall.

“We are assisting the men comprehensively through their soul, mind and body,” Morrow said. “It’s helping them seeing what is rooted in their lives for many years. We study why we are here and see the toxic soil we are rooted in, and then the transformation is moving from bad to good fruit. For the offenders to come thinking they can change themselves, they can’t. We have to go to the root of the issue.

Brian Blackwell is a staff writer for The (Louisiana) Baptist Message.