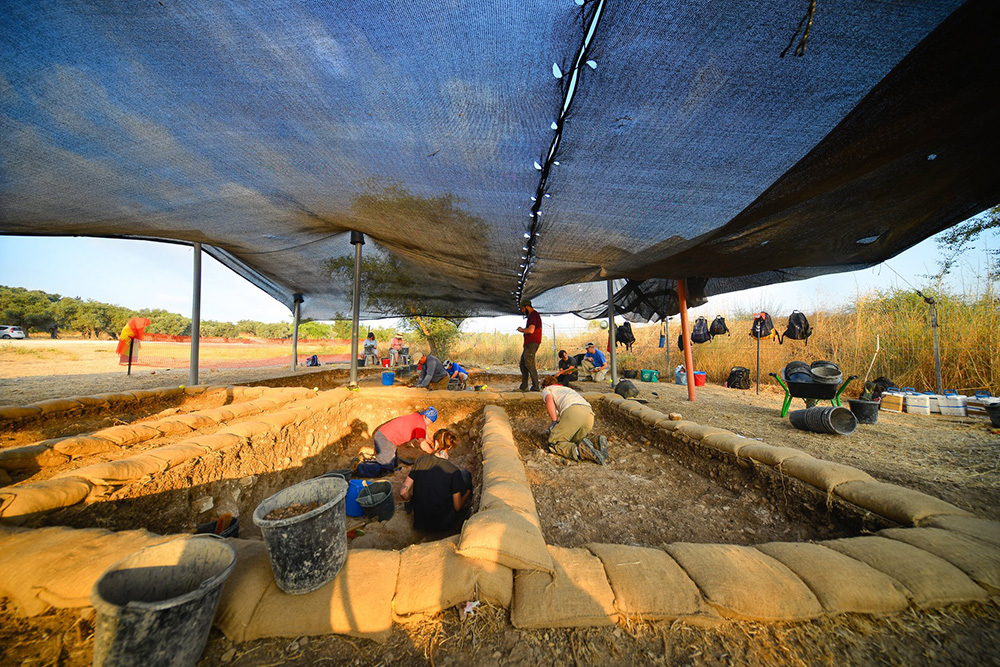 TEL HADID, Israel – Nestled between accounts of Israel’s defeat at the hands of the Assyrian army and the rise of Hezekiah’s kingship in Judea, the importance of 2 Kings 17:24-40 can be easy to overlook.

The verses speak of the people groups the Assyrians sent to Israel after the fall of the Northern Kingdom and the deportation of the Israelite elites. The passage in 2 Kings states that the Assyrians relocated people from “Babylon, Cuthah, Avva, Hamath, and Sepharvaim,” to the region of Samaria. Many scholars believe that these newcomers later intermarried with the remnant of Israelites and ultimately formed the religious sect known as the Samaritans.

New Orleans Baptist Theological Seminary’s Moskau Institute for Archaeology has partnered with Tel Aviv University (TAU) to excavate the site of Tel Hadid in search of answers regarding the peoples who were placed in the region by the Assyrians. This summer marked the first full excavation season at Tel Hadid. A year earlier, a small team from the two schools conducted a three-week site survey and dug exploratory probes in preparation for the full excavation.

Why Excavate Hadid?
The account in 2 Kings raises tantalizing questions about the nature of the area’s inhabitants during the Iron Age II Period (1200–539 BC). How did the influx of people from different backgrounds impact the region? How visible would their impact be in the material remains? What can be learned from these remains? Even with such important questions, the site remained uninvestigated until the late 1990s.

When the Israeli government decided to build a major north-south highway (Road #6), the proposed path went through Tel Hadid. The original plan was to cut a wide gap into the bedrock and build the four-lane highway just west of the tel’s highest point. As with any construction project in Israel, a salvage excavation was needed to assess the ancient remains located in the area that would be removed. A team from TAU conducting the salvage dig discovered rich material remains. So rich in fact, the Israeli government scratched the plan to cut a gap through the site and opted for the more expensive endeavor of tunneling below the site.

The most important finds in the salvage excavation relate directly to the influx of outsiders sent by the Assyrians. Excavators found two cuneiform tablets dating to the seventh century BC. The clay tablets – both legal documents – were written mostly in Akkadian and included both local (Hebrew) and non-local names. The NOBTS/TAU dig will build on and expand the research started with the salvage excavation through broader exposure of the site.

The dig team opened three primary areas of excavation during the four-week 2019 dig season – two areas on the northwest edge of the site and one near the summit of the tel. TAU also opened a fourth area in a Byzantine-era wine press as a community archaeology project. Through the community project, local school children and residents of the surrounding towns were able to gain “real-world” archaeology experience and contribute to the research into the site’s rich history.

About the Site
Tel Hadid sits about 3.5 miles southeast of the Ben Gurion Airport and approximately 9 miles from Tel Aviv. The park which encompasses the site is owned and managed by the Keren Kayemeth LeIsrael Jewish National Fund (KKL). The site is covered with trees. In addition to numerous pine trees planted by KKL, Hadid is home to a working olive plantation.

The site has long been identified as Hadid and the modern village which was destroyed during Israel’s 1948 war of independence bore the name “Haditheh.” The site is identified on the Madaba Map, a famous sixth century A.D. mosaic in the Church of Saint George in Madaba, Jordan. The name on the map – “Adithaim now Aditha” in Greek – reveals an earlier misidentification of the site. At one point, early church fathers believed the site was a town mentioned in the tribal allotment of Judah (Joshua 15:36). However, Judah’s allotments were well to the south and the map corrects the site name. Though not mentioned in the biblical account regarding allotments, Hadid would have been in the tribe of Ephraim’s allotment. Hadid sat on the border between ancient Israel and ancient Judah during the days of the Divided Monarchy.

The Bible mentions Hadid three times – Ezra 2:33, Nehemiah 7:37 and Nehemiah 11:34 – all in connection with the return of exiles from the Babylonian captivity. In all three accounts, Hadid is mentioned in connection with Lod, a site approximately three miles southwest of the tel.

The dates for the three-week, 2020 Tel Hadid Expedition are June 14 – July 3, 2020. Volunteers a welcome. For more information on the costs and detail regarding the excavation, visit https://hadidexpedition.org/