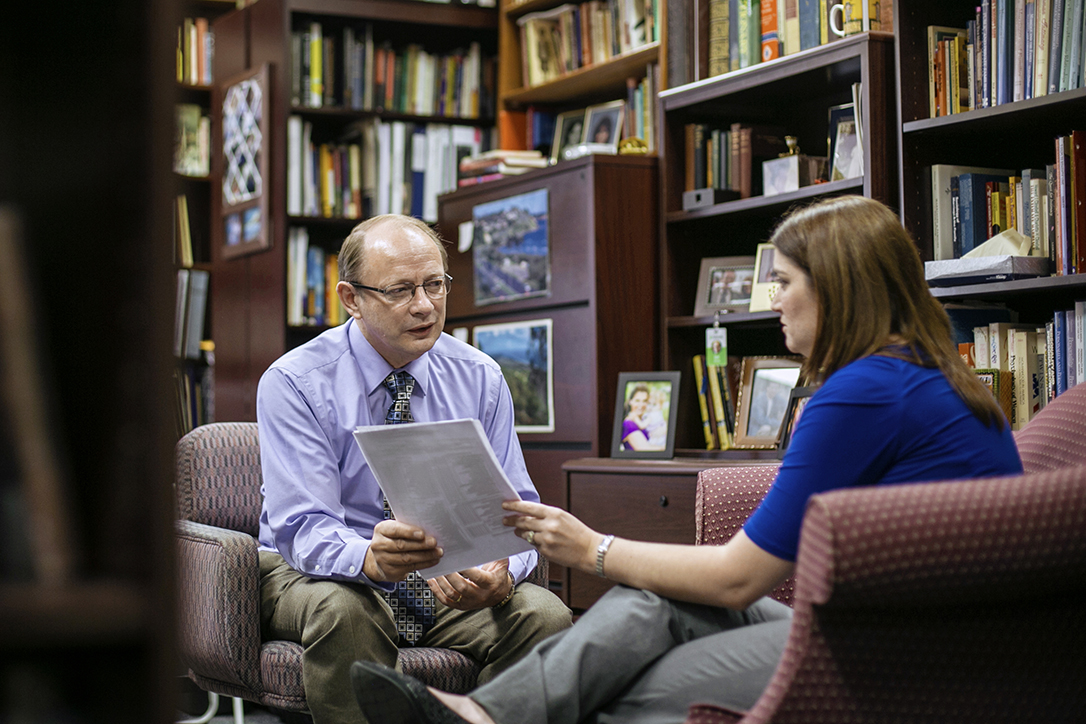 When the Church Hurts: Helping a community of believers in pain
By Marilyn Stewart

A pastor’s death, disappointment in a leader, unimaginable tragedy—trials for a body of believers come in all packages and varieties.

Ian Jones, NOBTS professor of counseling, has cared for communities of believers reeling from devastating loss. The night of Sept. 15, 1999, Jones was called to Wedgwood Baptist Church, Ft. Worth, Texas, after a gunman took seven innocent lives.

A congregation’s recovery can be complicated as individual members grieve differently and heal at different rates. From this experience and others, Jones has learned lessons useful for anyone experiencing grief.

At Wedgwood, the gunman interrupted an annual youth event held at the start of each school year. Hundreds were present. Of the victims, many were connected to Southwestern Baptist Theological Seminary where Jones served on the faculty at the time.

How does recovery begin after such stunning loss?

Determining one’s “location” is a first step toward healing for individuals and then the church, Jones explained. By location, Jones means acknowledging in a healthy way one’s thoughts and feelings toward God, self, and others. Jones points to Genesis 3, “the first crisis counseling intervention in human history,” to note that God’s first question to Adam and Eve was, “Where are you?”

“Where you are is basic to any crisis intervention,” Jones said.

Kathy Jo Brown, a longtime friend of Jones and his wife Linda, lost her husband Shawn in the Wedgwood tragedy. In his book “The Counsel of Heaven on Earth: Foundations for Biblical Christian Counseling,” Jones recounted some of Kathy Jo’s thoughts as she journeyed through grief.

“I believe the most beneficial aspect of my grief is to know that the whole gamut of my feelings is normal, and that God understands each and every emotion,” Brown said. “He has carried me, even when I forget to ask. He speaks, even when I forget to listen. When I become overwhelmed with questions and despair, I have learned to cry out again and again, ‘Lord, I trust you.’”

Healing begins with a healthy acknowledgment of the depth of one’s pain, Jones said. From there, a believer can call on God to bring the healing power necessary to overcome.

Soon after the Wedgwood shooting, Jones realized God had used a different crisis to prepare him.

In Mexico two months earlier, Jones had spoken to missionaries devastated by the drowning deaths of colleague Gary Sloan, his daughter Carla Sloan, and two summer missionaries newly arrived on the field.

Jones sensed the group’s need to process the tragic event. “Where were you when you heard and what did you do?” Jones asked.

After a long silence, individuals began to speak. The group soon realized that God’s orchestration of events had allowed them to respond quickly and care for the grieving family.

“People began to see it at a different level,” Jones explained. “In the midst of the tragedy, God was still present. God was still working.”

Jones draws from Jeremiah 15:19 to encourage believers to stay focused on God in hard times. The New American Standard Bible reads “extract the precious from the worthless,” Jones explained, adding that God told Jeremiah to look beyond the circumstances to see what He was accomplishing.

“We learn to extract the precious from the worthless by looking for the hand of God in every situation,” Jones said.

A superficial “Praise the Lord, anyway” response is not what Jones means, but rather an understanding that God uses trials to strengthen faith and bring about something valuable. Paul and Silas’ example in Acts 16 shows the difference, he added.

“It was a real picture of faith,” Jones said. “Paul doesn’t understand, but he trusts.”

People respond to loss differently, Jones said. Some want to recapture a sense of normalcy as quickly as possible. Others see returning to a normal schedule as dishonoring the loved one lost.

“Neither are wrong. Neither are right,” Jones explained. “But it reflects location.”

Patience with one another is crucial to healing as a community of believers, Jones said, adding that genuine concern is most important.

Jones related how Kevin Galey, a Ph.D. student at the time of the Wedgwood shooting and a survivor, showed a friend one of the bullets that had been removed from his body. With tears in his eyes, the friend admitted, “I don’t know what to say.”

Galey confided to Jones later that the friend’s response was more comforting than anything else he had been told.

Jones said acknowledging pain and loss, being patient with other members as each processes the pain differently, and taking the scriptural admonition to “bear one another’s burdens” (Galatians 6:2) seriously, can help a body of believers survive loss and come out stronger.

HOW TO PREPARE FOR FUTURE LOSS

“There is no way, really, to prepare (for tragedy),” Jones said, but there are steps that can be taken beforehand to ensure that vital resources are in place when tragedy comes.