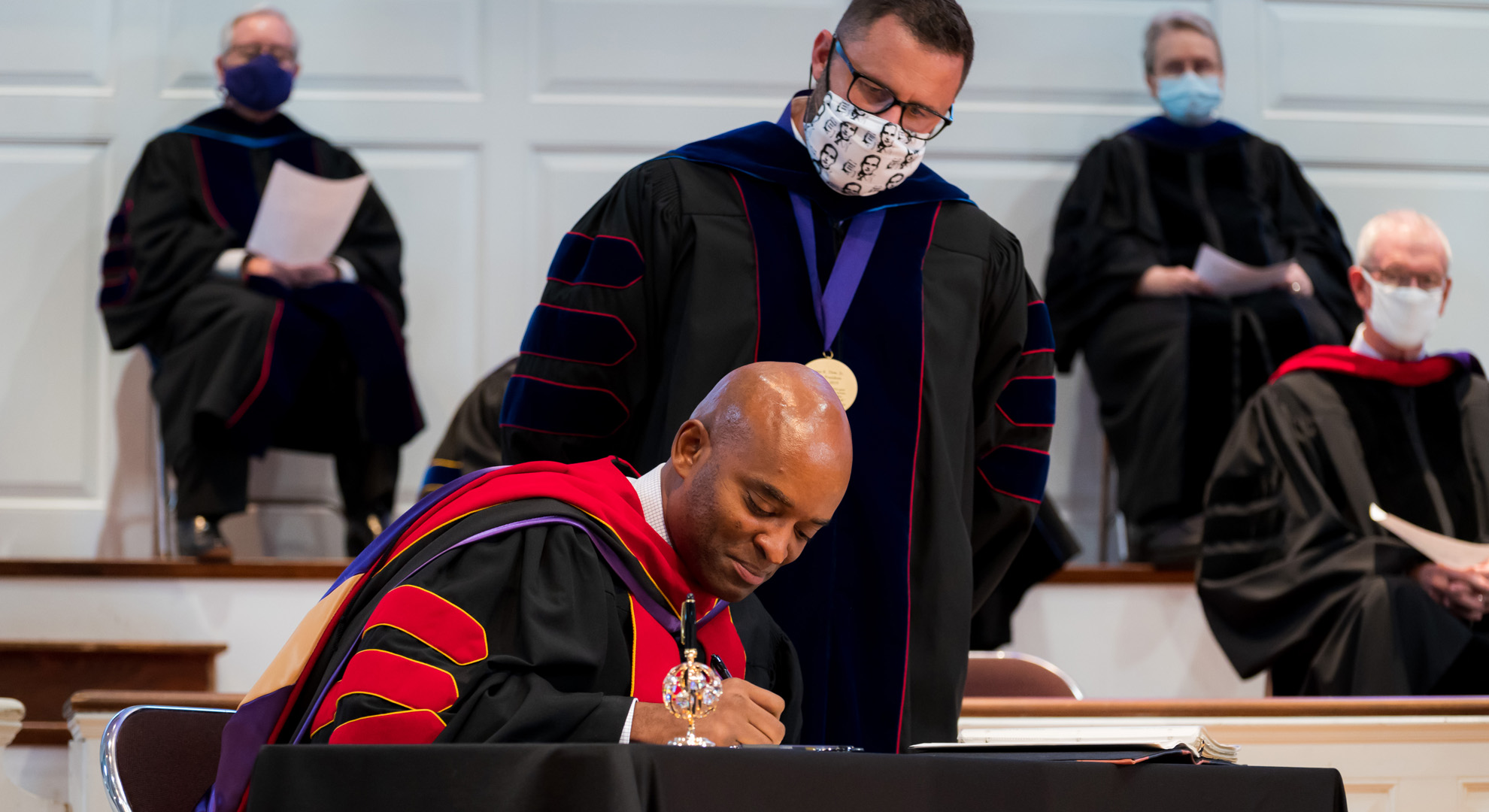 New Orleans Baptist Theological Seminary President Jamie Dew posed a question to the audience gathered Sept. 3 for convocation, the official start of the academic year. How can believers follow God’s call and fulfill His mission in a world torn apart by hostility and division?

The service was delayed one week due to closings in anticipation of Tropical Storm Marco and Hurricane Laura. The limited number of in-person participants wore masks and practiced social distancing in Leavell Chapel, observing COVID-19 guidelines. Others watched from overflow rooms and via the Livestream.

Before posing his question, Dew reminded the audience of the seminary’s mission to prepare servants to walk with Christ, proclaim His truth, and fulfill His mission.

“How do we do that today?” Dew asked. “In a context of overwhelming hostility, division, and turmoil, how do we live our lives in ways that please the Father and execute that mission?”

The task God gives to believers is neither easy nor difficult, but instead “impossible if left to ourselves,” Dew said, adding that the mission can only be accomplished when believers fully depend on Christ.

Dew explained further that while hostility to the Gospel is present and may be growing, today’s generation is not the first to face it.

“Yet while [other generations] faced such things,” Dew explained, “somehow, in God’s providence, He advanced His kingdom through their lives.”

First, the disciples faced “severe” opposition, yet responded with respect and grace, Dew noted, and urged listeners to remember that speaking truth and grace are “not antithetical.”

“You may have to say hard things, but you yourself can be gracious,” Dew said. “This world stands desperately in need of an example of how to conduct our lives in a way that is genuinely and authentically Christian. Let’s be that.”

As the disciples did, believers must also rely on the Holy Spirit. Dew also noted that Jesus Himself did not begin his earthly ministry until the Spirit of God descended upon Him.

“No matter what your education may be, no matter what your gifts or talents may be, if you don’t have the power of the Holy Spirit infused within your life, you are bankrupt,” Dew explained. “You are a person who needs to live life in desperate submission to Christ.”

Thirdly, Dew pointed to verse 9-12 to say that listeners will face trials and difficulties – even some “severe” –  but that believers must preach “Christ and Christ alone” regardless.

The disciples stood strong in the face of opposition because they knew they were accountable to God, not human authority, Dew explained. Dew cautioned listeners to remember that “the enemy” knows their vulnerabilities and uses their weaknesses to try to lure them away from the task.

Finally, Dew said the disciples faced opposition with grace because they stood in unity with the body of Christ. Though the disciples were diverse and held different ideological perspectives, they found unity was possible in Christ, Dew said.

Dew pointed to Christ’s prayer for his followers in John 17 to show that unity among believers is essential.

“Christ on the night before He is crucified, what is He praying for?” Dew asked. “He’s praying for unity in the body of Christ. How underemphasized, how under-realized, how disobedient of the body of Christ to let every conceivable thing divide us that could. Meanwhile, the world is watching.”

Dew concluded with a charge to listeners regarding the opposition they will meet.

“I remind you and charge you, NOBTS. We’re not the first generation to taste and feel this. There have been other generations that have gone before us and have tasted and felt this, and they found in Christ a way forward,” Dew said. “May we do the same.”

During convocation, new faculty members were welcomed and faculty service anniversaries were recognized.

Norris Grubbs, provost, noted that NOBTS was founded by vote of the Southern Baptist Convention in 1917, prior to the penning of the 1925 Baptist Faith and Message. The NOBTS faculty at their founding formed the document the Articles of Religious Belief that outlined their beliefs and their commitment to uphold them faithfully. Every new faculty member since has signed the document along with the Baptist Faith and Message.