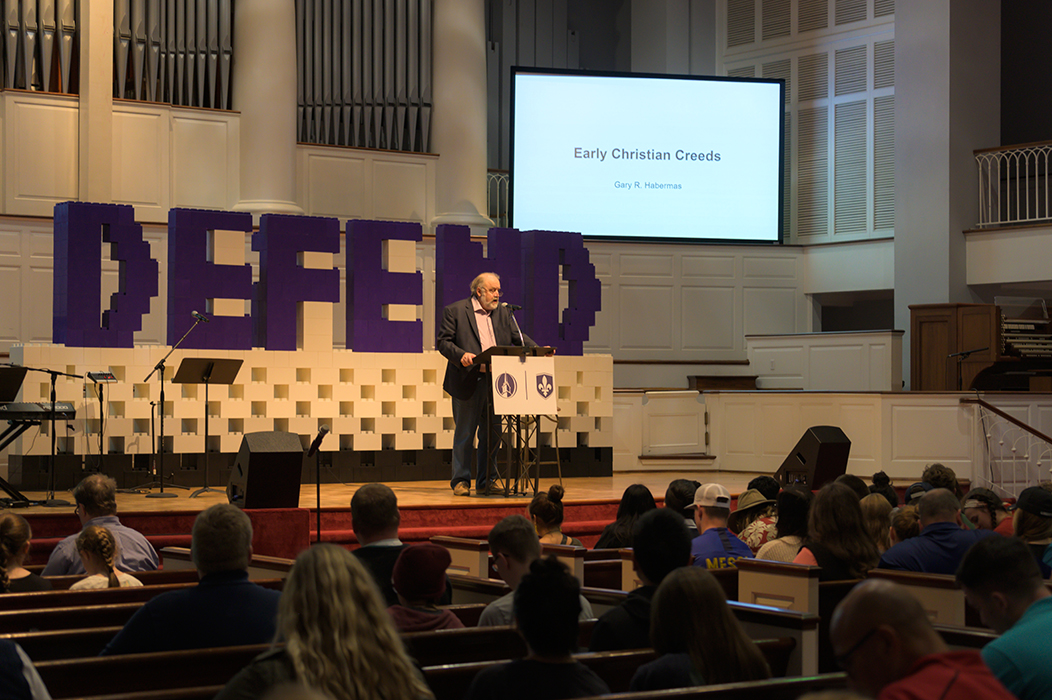 DEFEND takes on the toughest questions of faith
By Marilyn Stewart

Distance is no obstacle when the journey ends at Defend the Faith, New Orleans Baptist Theological Seminary’s weeklong apologetics conference. This year’s conference, Jan. 6-10, proved to be no exception.

College groups came from as far north as Clear Creek College in Pineville, Ky. and Oklahoma Baptist University, in Shawnee, to the southwest. Registration topped 400 this year –the highest yet—with college students making up about half the audience.

But when miles traveled are tallied, one family definitely takes the lead.

Greg Dietz and daughters Lydia and Graci flew from Wausau, Wis., to attend Defend for the first time. The flight—one way—covered about 1200 miles.

“The breakouts were amazing,” Graci Dietz said. “I was blown away by the professionalism of the speakers and by the ability to be able to talk to them one-on-one.”

Fun is as much a part of Defend as the sessions that make for an apologetics “boot camp.” Whether it’s at the Tuesday evening Trivia Night, around the cafeteria lunch table, or in a breakout session, there is plenty of opportunities to forge new friendships.

But more than anything else, Defend is about answering hard questions.

Dietz, raised in church but who now sees herself as an agnostic, learned of Defend from apologist and Defend speaker Frank Turek’s website. Graci said she knew it was time “to put my money where my mouth is” and look for answers.

When answers to nagging questions are needed, Defend is the place to be.

Jamie Dew, president of NOBTS and Leavell College, welcomed registrants urging them to conduct every apologetic conversation with virtue and common sense. An effective apologist abides in Christ, and approaches every person with love, humility, and civility, Dew said. Common sense guidelines include listening more than speaking, discerning the openness of the other person to the gospel, and finding “as much common ground as possible” with someone of an opposing view.

“Apologetics is hard work,” Dew said, adding that there is no ‘silver bullet’ or statement that answers every objection. “Ultimately, what people need from us is an investment, not a quick, one-off conversation.”

The ‘best evidence’ for the New Testament

The creeds, brief sayings embedded within the New Testament text that were used by the early church, show what the earliest believers preached and believed about Christ between about 30-50 A.D., the time between the crucifixion and the first New Testament book, considered by many to be 1 Thessalonians.

Habermas explained that the evidence for the creeds is “deep, historical, and strong,” and shows that the earliest believers saw Jesus as God the Son—a high Christology—and stressed his death, deity, and resurrection. Some examples are Romans 1:3-4, Romans 4:25, Romans 10:9, and 1 Corinthians 15:3-4.

John Lennox, Oxford University professor of mathematics and author of “Can Science Explain Everything?” and other books, said via video chat from Great Britain that science and faith complement each other rather than conflict. The real conflict is between worldviews, Lennox said.

Naturalism, for example, sees all reality as produced by natural forces only, Lennox said but noted that if thoughts are the result of mere chemical reactions in the brain, then there is no reason to trust them as true.

The use of story

Alister McGrath, Oxford University professor and author of dozens of books including the recent “Narrative Apologetics,” said via video chat from Great Britain that incorporating stories from the New Testament, literature, or personal stories when sharing the Gospel helps others see themselves inside a larger story--God’s story.

“Using narrative shows Christianity is not just true, it is real,” McGrath said. “It shows [Christianity] has the power to change your life.”

To learn more about the apologetics program, visit nobts.edu/apologetics.