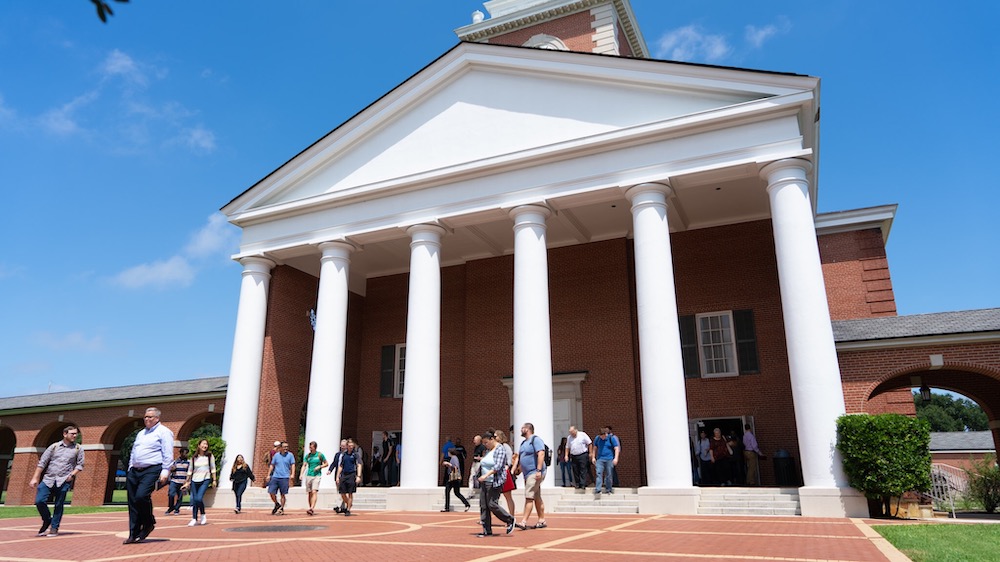 Here’s the second part (first part here) of my sit down with Jamie Dew, the new president of NOBTS and Leavell College. He talks about his vision for the school.

(You can catch the full interview on our podcast: nobts.edu/podcast. It’ll be out Thursday, August 22.)

You’ve described a burden for NOBTS and Leavell College. What is it?

Two fronts are where my mind is constantly turning at this point. One has to do with a big picture, 30,000-foot vision type of stuff that has to do with the ethos of the school.

And then the other set of questions that I'm always churning on that are practical and strategic.

Let me start with the ethos side of it.

This world will forget my name. That's the bottom line. The day I die, the people that come to my funeral are going to sit there and cry for a minute. And then they're going to go eat some fried chicken and move on with their life. And there'll come a point where even my own descendants, probably two or three or, not two. But maybe three or four generations down, my own great, great, great-grandchildren won't know who I am. That's family.

So we should all remember that the fame for which we are laboring and striving for — the worship of our own name, that idol that we so often bow down to — is, as Ecclesiastes says, vanity of all vanities.

I will be forgotten.

And this school will one day be forgotten.

And we should remember that.

With that in mind, I want our school and our people first and foremost, above everything else, to be servants.

If I can be honest, I love being a Southern Baptist. There's no other denomination I would want to be a part of. There really isn't. There are so many good, wonderful things about us. But in our worst version of ourselves, we can peacock. We can strut and we can puff ourselves up. We can show off how big we are and how special we are. And it's all vain. We'll all be forgotten one day.

I want to train up a generation of people — and I want to be a leader, above everything else — who just serves. And be willing, like Christ, to take the towel and the basin. Look, Paul says this. And we nerd out in Philippians 2 about the kenosis passage. Jesus emptying himself, he is God. It's one of these great Christological statements that Jesus is equal with God.

I want to be a part of training up a generation that they care vastly more about advancing Christ and his kingdom and serving the broken and the lost in the name of Christ than they do about getting their own church, or having their own Twitter account with lots and lots of followers, or…fill in the blank of whatever it is.

Is there another part to the ethos side?

Gospel proclamation. This is something New Orleans has been known for and has done well in its history. And doggone it, I don't want that to drop off. I want that to continue on and march on. We have to proclaim to those that are dying. Because they're perishing and they don't have life, even now as we speak. Not to mention what's to come. So gospel proclamation is vital and key.

And I see in that, man, in church planting and church revitalization and missions and evangelism and all of those things have to be essential to what we do.

And last of all, if we're going to do that — this is the part that strikes me — the Bible tells us in the book of Psalms that unless the Lord builds a house those who build labor in vain.

And Jesus says abide in me, and I in you and you can bear much fruit, but apart from me you do nothing.

Man, we are called to things vastly bigger than ourselves.

And the Lord has burned that into my mind these last eight months throughout this process.

And certainly, for me I can sit here and tell you the job in front of me, the job that the Lord just put in my hands, is so much bigger than me. If I'm going to do any of the things that God's called me to do, and he always calls us to stuff bigger than ourselves, then, man, we are going to have to walk on our knees every single day with Christ.

And he's going to have to show up.

If he doesn't show up, then we're in a lot of trouble.

And as scary as that sounds, I think that that's the right place to be.

So I want that. I want this to be a place where we walk with God more than we ever have. And that might sound, ‘oh, of course, this seminary president's going to say that.’ But those who've been to seminary will understand what I'm about to say, and maybe those who haven’t — maybe this will surprise you.

Seminaries can often be the place where people's spiritual walks dry up.

They don't mean to, and it's surprising. But it's because we get here and all of a sudden Christianity goes from being a very personal, spiritual thing, to now a very intellectual, professional thing. We're doing it professionally now.

And when that happens, we've got a perfect recipe for disaster.

And it's also a recipe to make us completely powerless to do the work that God's called us to do.

Okay, so that’s the big picture side. What does building it out look like?

Structurally, there are some strategic things that I want us to be about.

Leavell College for one. We're going to expand it, and develop it a lot.

Enrollment strategy is another. And by enrollment, we don't just mean recruiting and admissions.

We mean things like advising students, helping them with financial aid. Doing all the things that actually help students through their enrollment process, from matriculation at the beginning to graduation at the very end.

This is why you’ve started the +3 challenge?

That’s right. We want to help them succeed. Because what we don't want is a generation of students coming, starting…and then fizzling out.

Next is marketing and communications.

I think that our story, this podcast, has been a great example of the kind of thing I think we have to do more of. Specifically, we want people to have a mindset about what New Orleans is all about.

We have to sit down and tell that story very differently because this is a cool place to be.

And then, last of all, denominational relationships. I need to meet — and my team needs to reengage — the denomination itself.

Because if we're really going to be servants for Christ we've got to do this.

Subscribe to our podcast at nobts.edu/podcast, and listen to the full interview on Thursday.