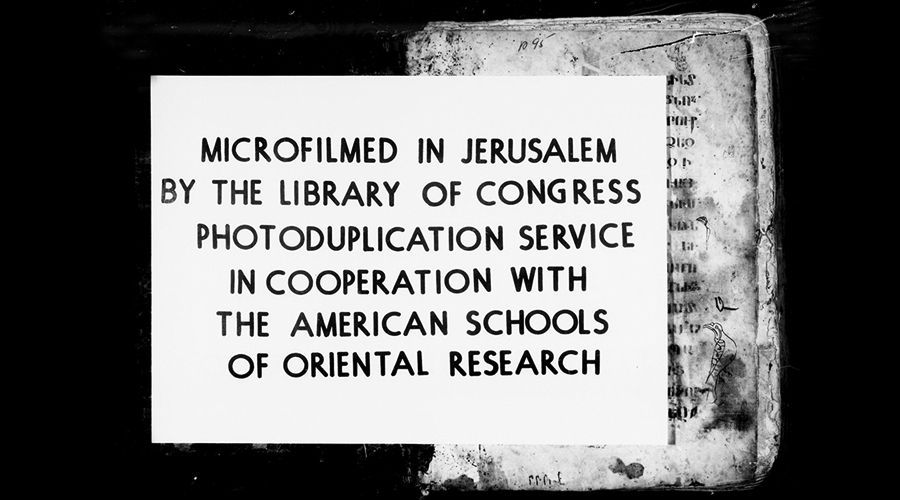 New Orleans Baptist Theological Seminary has been chosen as the recipient of an important microfilm collection of ancient manuscripts from monasteries in Egypt, Greece, and Israel.

“For on-site research, this collection puts us in a very elite class in North America,” said Bill Warren, director of the HCNTTS. “The Haggard Center is one of the best places around to study original source documents from the New Testament and church history.”

The collection is a master set of microfilms produced by the Library of Congress, IGNTP, the American Schools of Oriental Research, and other partners. Kenneth W. Clark led expeditions to Saint Catherine’s Monastery in the Sinai Peninsula in Egypt, the Mount Athos Monastery in Greece, and the Orthodox Patriarchate in Jerusalem in 1949 to photograph manuscripts. The manuscripts Clark photographed include many writings from early church fathers as well as New Testament documents written in as many as 12 different languages, including Greek, Syriac, Georgian, Coptic, Armenian, Arabic, Turkish and Ethiopic. The documents span from the 5th through 15th centuries A.D.

According to Warren, this particular master set of microfilms was housed at the University of Manchester’s John Rylands Research Institute for many years. Recently, Rylands returned the set to the IGNTP. In turn, the ICNTP invited schools and institutes to submit proposals to receive, house, and preserve the collection. With the winning proposal, the CNTTS will receive the collection for only the cost of shipping from Europe to New Orleans.

While the bulk of the microfilms are not New Testament or even Greek-language documents, Haggard Center director Bill Warren said the collection is an important addition to the Haggard Center’s holdings. The collection, he said, is a valuable research tool for scholars in a number of disciplines including biblical studies, church history, and theology.

As with many important microfilm collections, the set is available in digital format. However, Warren sees a real advantage in preserving the microfilms and making them available to researchers.

“Often the microfilms offer better quality than the digital copy,” Warren said. He sets the value of the collection at approximately $120,000.

“The depth of scholarly work that undergirds our Bibles is primarily done at a handful of settings around the world, including here at New Orleans Baptist Theological Seminary at the H. Milton Haggard Center for New Testament Textual Studies where the handwritten manuscripts of the Greek New Testament are studied,” Warren said about the center. “Those studies provide the solid foundations that we enjoy for our Bible's accuracy."