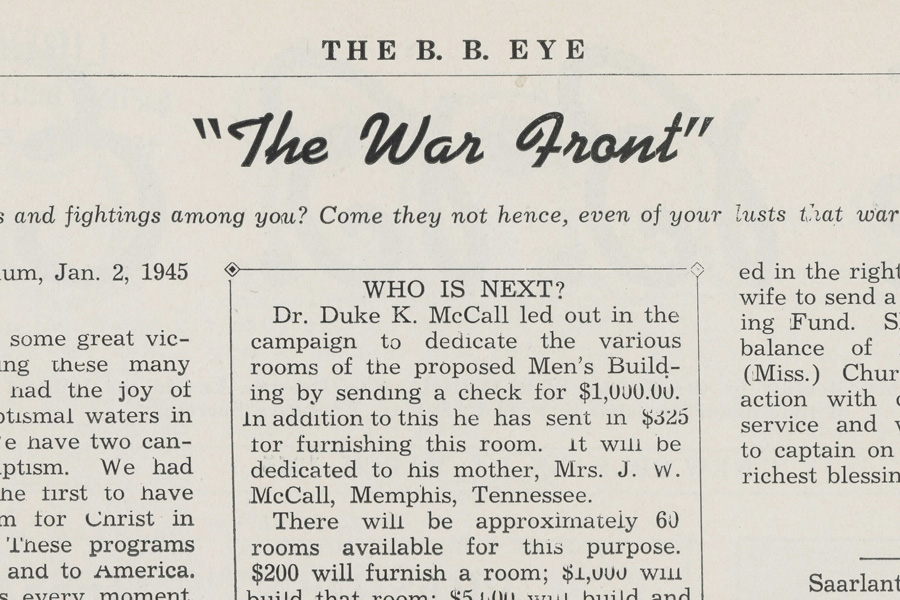 World War II may have interrupted studies at BBI, but it did not interrupt ministry. As seminary family members fulfilled a duty to country,  they continued to serve their Lord. Their letters home spoke of hardship, need, and God’s grace as they witnessed lives changed by the Gospel.

Here is a sampling of letters and notes from BBI friends and family members during the difficult days of war.

“My work here is proving to be most interesting and beneficial. Many experiences and lessons that have been mine as a chaplain would undoubtedly have taken years of pastoral duty to have accomplished. The opportunity for work is immense, the task is difficult, but the men are responsive. It is heart-rending to see how grateful they are to see a chaplain who is human enough to be close to them, and yet have a hold on God that they can see and understand.”


One February 1945 letter came from a mother with four sons in the service, one of whom was a prisoner of war on Shikokun Island, Japan.

It would give me great pleasure to put a mark in even the smallest amount on your check, but when I tell you that my personal allowance is $25 per month, I am sure you will understand. Dr. Hamilton accepted $1 on occasions with good grace. My hope and prayer is that God will multiply my offerings, as they are spread out over such a vast territory.

Having four sons in service, I have just completed a $.25 stamp book for a war bond—and donated it to the Red Cross. The one before that was to the Bible Society …

The letter writer goes on to say that her son in captivity is on the verge of blindness due to lack of nutrition and expresses her fear that he may not be liberated in time. She wrote, “Only God can do it and I have left it to His will.”

She concludes the letter with simply, “May I ask that you include us in your prayers.”


The March 1945 issue of The B. B. Eye shared letters from graduates serving with the military in Europe and Asia. Click here to read the letters.