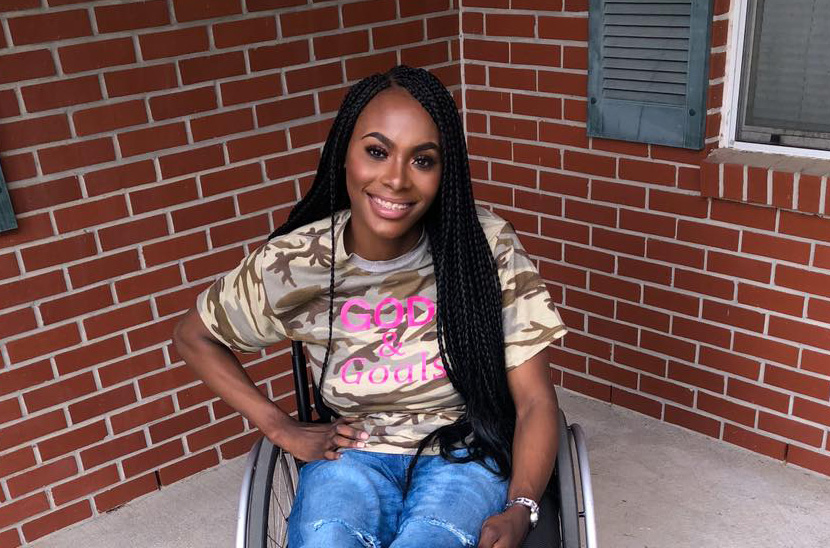 She’s led a mission team to Haiti, ridden the Amazon River into isolated villages for the Gospel, and shared Christ with construction workers in Nicaragua. And she’s done it all from a wheelchair.

“God’s glorified Himself so much in my life and in my testimony since I’ve gotten shot, and to me, that’s more important than walking,” Jenkins said. “God gave me new life.”

The gunshots that ended Jenkins’ ability to walk at age 17 ended also an old way of life that included trouble in school, time in a gang, and eventually, rebellion against God. A friend who lived out the Gospel in front of her led Jenkins to faith in Christ two years after the incident.

Today, the pretty young woman with a contagious smile pushes new boundaries, but now it’s for the Gospel. Jenkin’s first mission trip was to New York with her new mom and dad who “adopted” her at age 19.

“From then on, I’ve been on mission,” Jenkins beamed.

Co-founder of The Bible Ministry, Jenkins meets weekly with a packed room of women for Bible study, often with 100 more following on social media. The pink Bibles the ministry gives away come with a tee-shirt that reads “Blessed and Beautiful.”

“I grew up thinking it was normal not to have your daddy in your life or for your mom to be on drugs, or for your grandmother to care for you,” Jenkins said. “Coming from the inner-city, I didn’t realize how powerful [my story] is.”

Raised by her grandmother in New Orleans’ Central City, a neighborhood known for violence, Jenkins was a senior in high school when an ex-boyfriend shot her three times. Three months in the hospital—one in ICU—left Jenkins dependent upon family members ill-equipped to help.

Battling depression, Jenkins struggled to forgive those who had walked out of her life, the boy who shot her, and even herself for decisions she had made. New perspective came when Jenkins attended First Baptist New Orleans with a friend and came to faith in Christ.

“My life instantly changed,” Jenkins said. “I met new friends who are in Christ and care for me.”

Michael Chance (M.R.E., ’76) met Jenkins while visiting NOBTS with his son-in-law and then-prospective student Jeff Markey (M.M.C.M ‘15). On that trip, Chance joined FBNO’s compassion ministries one evening and served alongside Jenkins feeding the homeless. Chance, with wife Linda, soon knew God was calling them to make Jenkins a part of their family.

“I sensed God had a plan and purpose for Quell,” Chance said. “I felt God telling me, ‘I’m going to use Quell in ministry and I want you to help her get ready.’”

The couple welcomed Jenkins into their home, nursed her back to health and helped her become independent. Though the new relationship required adjustments, Linda Chance said Jenkins was “easy to love.”

While Jenkins’ “adoption” at age 19 was not a legal contract, it was full membership in the family. Michael and Linda became “Dad” and “Mom,” and their son and two daughters, her siblings.

“We are all adopted,” Chance said, referencing Galatians 4. “All of us are broken … we are all in a spiritual wheelchair until God redeems us.”

A longtime pastor in New Jersey and New York, Michael Chance serves as associate minister at the growing Graffiti Church in the Lower East Side of New York City. Jenkins’ testimony resonates with the urban setting, giving her many opportunities to share.

Of the lessons Michael Chance has learned from watching Jenkins, gratitude is at the top of the list.

“I don’t thank my heavenly Father as much as she does,” Chance said. “I’m amazed at how much gratitude she has.”

No trip for Jenkins is handicapped accessible. No trip is easy. She’s gone on trips with people she didn’t know and at times has depended on strangers to carry her, wheelchair and all. People are God’s greatest gift to her, Jenkins likes to say.

“At every stage, at every season, every mission trip, God always provides people,” Jenkins said.

One tragic, “life-changing” moment took her ability to walk but gave Jenkins a fresh perspective on a fallen world “where bad things happen,” Jenkins said. Still, her passion for encouraging others not to give up, but to trust God and “go another lap” has earned her the nickname, “the drill sergeant.”

Gratitude to God drives her passion.

“My life is way better than my life before I got shot,” Jenkins said. “I’d rather be in this chair with Jesus in my life than to walk without Him any day.”