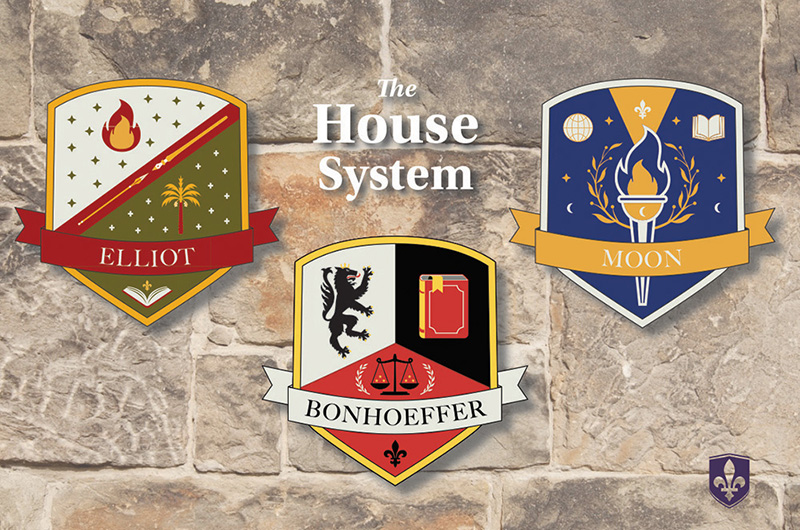 During the launch meeting and house placement event on Nov. 16, NOBTS and Leavell College President Jamie Dew challenged the students to make the most of this new opportunity. He said that the House System can reshape and reenergize the college experience at Leavell College, but will only reach its potential if students support the effort.

Each undergraduate student was placed in one of three houses named for historic Christian leaders who exemplify the values listed in the school’s mission statement.  That statement reads, “Leavell College prepares servants to walk with Christ, proclaim His truth, and fulfill His mission.”

Elliot House, named after missionaries Jim and Elisabeth Elliot, exemplifies the value of devotion (walking with Christ). Jim and Elisabeth originally ministered to the Quechua people of Ecuador. After Elliot and his fellow missionaries heard about an isolated people group, the Huaorani, they began an effort to make contact with them. Jim and four other missionaries were martyred by the Huaorani in 1956. In 1958, Elisabeth went to live among people who killed her husband. Through her act of forgiveness and devotion to the Great Commission, many of the Huaorani came to faith in Christ.

Bonhoeffer House exemplifies Truth by honoring the life and ministry of German pastor Dietrich Bonhoeffer. Serving during the rise of the Nazi party in German, Bonhoeffer stood firm on gospel truth and opposed the brutal, evil reign of Adolf Hitler. Standing for Truth cost Bonhoeffer his life in 1945 when he was executed at a Nazi concentration camp.

Moon House exemplifies missions recalling the legacy of Lottie Moon, the beloved Southern Baptist missionary to China. Moon moved to China in 1873 and ministered for 39 years. Starving and sick, colleagues in China arranged for her to return home in 1912, but she only made it as far as Japan. Moon died in Kobe Harbor on Dec. 24, 1912. Her sacrifices for the gospel and her commitment to missions are remembered through the Lottie Moon Christmas Offering which raises millions of dollars each year which undergird the efforts of the International Mission Board of the Southern Baptist Convention.

“This is a tradition that goes way, way, way back,” said Dew. In fact, the practice began long before the founding of the United States and even predated the Protestant Reformation. The University of Oxford adopted the “house system” approach in 1096 and Cambridge followed Oxford’s example by instituting a house system in 1209.

As dean of the college, Strong believes the House System will be a “game-changer” for his students. He is especially encouraged by the discipleship focus of the houses.

“At the heart of the college is discipleship – walking with Christ constantly and consistently,” Strong said. “The house system encourages each person to do this individually through intentional discipleship. Also, the opportunity to share the journey with others for encouragement and growth is an exciting part of the journey.”

Strong believes the members of each house will spur one another along in the discipleship process and yield life-long spiritual dividends in the lives of the students.

“One of the exciting opportunities provided by the house system is the ability to connect with others. The members of the house will have the opportunity to grow closer,” Strong said. “Through this process, I am convinced they will grow in their relationship with Christ and in turn, they will grow closer in community. This becomes the pattern for the remainder of life.”

Another key aspect of the House System is faculty involvement. Strong said that each house will have three faculty members involved to help with discipleship and spiritual formation.

“This involvement will provide a time for the faculty to invest in the lives of the students and to encourage them,” he said. “This investment of faculty in the lives of students has been at the heart of the ministry of Leavell College.”

Each house will have three student positions – director, community advisor, and scholar – along with three faculty participants. Each house's leadership will plan and implement activities, mission projects, and fellowship for their own houses, and all three houses will participate in joint gatherings and ministry projects. In addition to this discipleship, missions, and fellowship aspects, the House System will host a friendly competition between the different houses. The yearly competition will conclude with one house receiving the Leavell College House Cup.