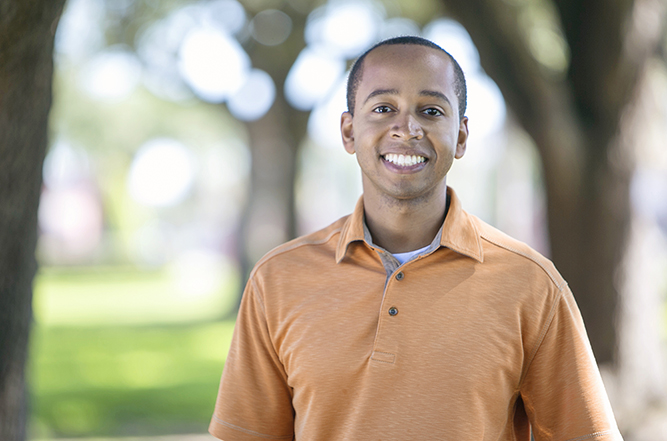 Military and Police Chaplain, Pastor at Heart
By Marilyn Stewart

“Beans and bullets” is a common descriptor for the Army Reserves Special Troops Battalion 377 Theatre Sustainment Command Unit’s job -- whatever an infantry soldier needs, the “377” provides.

For Larry Johnson, a military chaplain to the 377 and a Ph.D. student in Christian Leadership at NOBTS, being a chaplain is equally fundamental.

“It’s a unique challenge and calling,” Johnson said. “I’m a pastor at heart. That’s what I love to do. I love preaching, teaching, and shepherding people week in and week out.”

Between his service in the Army Reserves and his responsibilities as a student, a husband, and a father, Johnson also is a chaplain to the New Orleans Police Department. There he finds needs similar to what he encounters in the military.

“We’re in a global world where all of us are linked in,” Johnson said of the impact of current events on the men and women he serves. “Something that happens in one place impacts another place.”

Johnson’s unit is the Army’s largest Reserve Command unit, stretching over 35 states and providing logistical support to the combatant commander. The 377 works with other units and agencies to handle the logistics of transportation and needed supplies.

Johnson enlisted first as a private in 2001 and finished his training days before 9-11. The day after leaving active duty 11 years later, Johnson was commissioned into the Reserves. He returned to the Army as a chaplain.

“At first, I ran from it,” Johnson admitted, knowing what the job entailed.

Earning credibility with the soldiers is vital for any Army chaplain. For Johnson, his time as a private is a plus.

“I’m an officer that knows what it means to be enlisted,” Johnson said. “I know how a private feels. I can empathize on that level, and it gives me a bit more credibility with soldiers.”

When Johnson’s unit was called up for the initial COVID-19 response, he watched as soldiers’ stress level soared.

Soldiers wondered if they were vulnerable or if they were putting their loved ones at risk, Johnson explained. The tension “exacerbated” whatever struggles the soldiers were experiencing at the time, Johnson added.

“As soldiers, they fight an enemy they can clearly identify,” Johnson said. “During the COVID response, they were fighting an enemy they couldn’t see or identify, and that brings a level of stress you’re not trained to meet.”

FROM MILITARY TO POLICE CHAPLAIN

Johnson’s experience in the military, as he nears the 20-year mark, serves him well in his position as police chaplain for two New Orleans Police Department districts. Credibility as a chaplain is vital, as well, and Johnson’s military experience helps bridge the gap.

“Those walls are broken down quite early when they learn I am a veteran,” Johnson said. “That gives me the opportunity to speak to deeper spiritual issues, and when those issues come up, I am glad to help out these men and women who are sacrificing their safety to ensure our safety.”

Johnson cares for first responders at a time when the nation is on edge.

Still, it is often forgotten that police officers are human and have feelings, Johnson said.

“Police officers want to go to work, keep the community safe, and go home to their families. That’s their goal,” Johnson said. “That is an incredible amount of stress. They are always on high alert. And that is hard.”