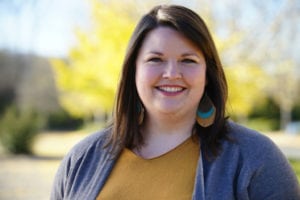 Mary Margaret West knew a lot about New Orleans Baptist Theological Seminary. As a member of the Leavell family, she had seen several family members earn their degrees, teach in the classrooms, and even lead the seminary.

She knew it was a great place to get a great education. She just wasn’t sure if it was the right place for her.

“Honestly, I probably didn’t want to come to New Orleans,” she says with a laugh. “I didn’t want to ride the coattails of anyone else. So, I told the Lord, ‘I’ll go anywhere but New Orleans.’ And He said, ‘No, that’s exactly where I want you.’ ”

Looking back on those early questions, Mary Margaret knows now that she made the correct choice. NOBTS was the right place for her.

“It’s not that God closed all the other doors to other seminaries,” she explains. “It’s just that He said, ‘This is where I want you.’ I just knew it was the right thing.  He put the city and the people on my heart and let me know that this is where He wanted me to learn and grow.”

That growth included building some strong relationships that helped shape her as a student and as a Christ-follower. Along with the academic conversations in class, the hands-on experiences in ministry around New Orleans gave her practical tools that she has carried into her career, first as a girls’ ministry specialist at LifeWay and more recently as a faculty member at Foundations Academy in Winter Haven, Florida.

“When I think about what God has called me to do, I’m able to take the things that were invested in me and reach individuals with the truth of the gospel and the hope of Jesus Christ,” says Mary Margaret. “It has a far-reaching ripple effect that you can’t fully express.”

That ripple effect will stretch into eternity. But Mary Margaret knows that it really didn’t start with her. It was made possible, in part, because God moved in the hearts of individuals who supported the mission of NOBTS. Their generous gifts made it possible for her—and many others—to focus on their calling instead of being distracted by finances. And she appreciates that help.

“I was able to graduate debt-free, which is something I don’t take for granted,” she says. “And I know that financial help came from so many different people. I got to meet some of them while I was on campus. Many others I’ll never meet. But these people believed in the mission of NOBTS and showed it in a very practical way. Their generosity met some very tangible needs for me.”

Since her graduation in 2012, Mary Margaret has been able to reflect on her time in New Orleans. She has traced the hand of God as He has worked in her life. And she’s developed a true appreciation for a decision that she wasn’t completely sure she wanted to make at the time.

“The people and the relationships I’ve built are what make it special—not just with my peers and my friends, but with my professors and the faculty,” she says. “Those are the things that have been so long-lasting. At first, I was so afraid of riding coattails; but in hindsight, I wouldn’t have done anything differently. I am grateful.”